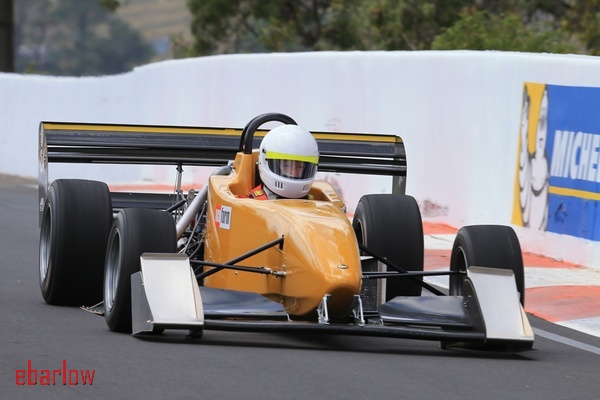 Bathurst’s Mountain Straight is the longest and fastest hillclimb on the NSW calendar and most agree that it requires more than a dash of bravery and a good right foot to make the most of it.

The second day of the annual BLCC double header dawned with plenty of discussion as to whether Round 2 winner Malcolm Oastler, could pull off the double and put himself into the lead of the championship pointscore after having missed the opening round.

The punters did not have long to wait with Malcolm’s OMS again setting the pace with a first run of 41.33s to lead Tim Edmondson (Gould GR55B) by just over half a second.

Ron Hay (Synergy Dallara) and dark horse Phil Heafey (Evo) were only marginally behind, Phil checking the forecasts and looking skyward for a dark cloud or two.

The pattern was now set but the result was always in doubt. On the next tour, Oastler stopped the clocks at 40.3s – Edmondson answered with 40.9s. Run three was more of the same with only tenths the difference.

Then the final run, Malcolm was again quicker, posting 38.82s for FTD, taking the honours from Tim Edmondson on 38.90s. It was worth watching the leaders’ final sweep down to the finish line on full noise, a great show of commitment.

Ron Hay battled on for third outright (43.82s) with Phil Heafey (Evo) next quickest despite having his last run spoiled by a late shower. It appears that Phil’s rain dance works, now he’s just got to work on the timing.

Zac LeLievre (Westfield Megabusa) overcame some dificulties on the third run to claim the next spot ahead of Darren Read (Minetti Monster), David Isaacs (Evo) with Tamworth’s Matt Halpin (Torana) rounding out the Top Ten.

Others to make it a double were Peter Brown (2C BAP Clubman), Garry Hobson (2F Porsche GT3) and “The Rev” David Wrightson had his revenge on Sunday in the Mini S/S.

Col Mayman continued his winning ways in the Beetle ahead of Glenn Torrens while John Gilbert (Commodore) was again quickest in 3J ahead of Martin McLoughlin (Torana). Bob Wootton was again successful in the Sb Lotus.

The early start to the season may not have suited everyone but we are now getting into full swing with the prediction of some epic battles to be fought this year.