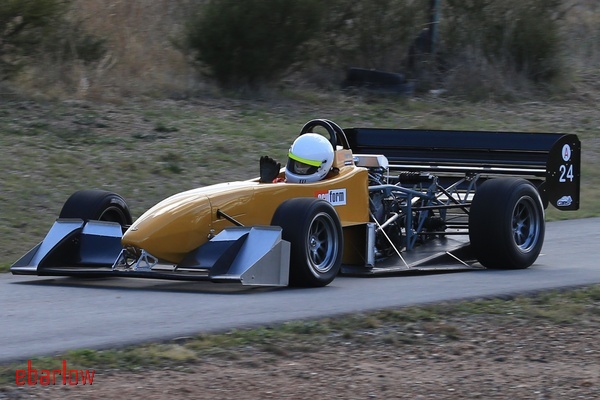 CAN ANYBODY STOP HIM?

With over 2 inches of rain in the week leading up to the Canberra event, some worried faces on the SDMA organising committee emerged. But as the day of the event came around, Canberra turned on a fabulous autumn day which allowed competitors 5 runs of the track.

The competition for the outright honours started early with Tim Edmondson (Gould GR55B)setting an impressive 39.81s on his first run. Malcolm Oastler (OMS 28) got on pace with his second run and lowered the bar to 37.59s. This was also a new outright record.

With a spin in the esses on run 3 it was becoming clear that Tim couldn’t stay with Malcolm and only managed a 38.48s to be second outright at the end of the day. Oastler then managed to lower his best run to 37.49s -Fastest Time of The Day!

Kevin Lewis (Dallara F3) managed only three runs throughout the day but finished with an impressive 42.75 to be third outright. Local driver, Zac LeLievre continues to impress in his Westfield Megabusa and was next on 42.98s.

Matt Halpin (Torana) was next with Brodie Tilbrook, in his Historic Elwyn Formula Ford rounding out the top ten.

As usual Road Registered classes were well subscribed and tightly contested with a strong showing from local drivers (with local knowledge – I guess they had an advantage!!).

A fabulous day was had by all, with no major incidents. There were a few stoppages as the kangaroos wanted to join in the fun but these were expertly chased away by the local volunteers.

Thanks to the major sponsor of the event Reliance Automotive Services. Also a huge thank you to all the volunteers on flag points, grid marshals, car chockers and kangaroo chasers.