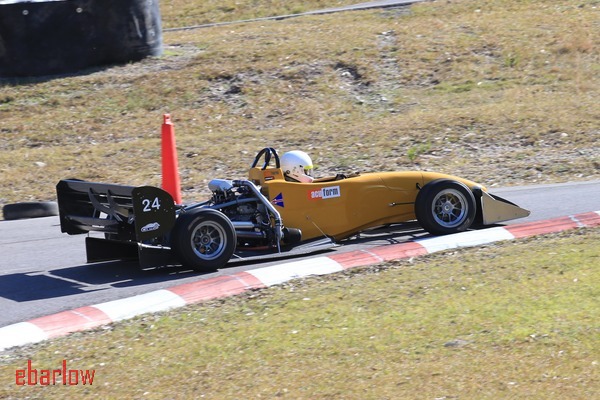 MO TOO GOOD AT RINGWOOD!

Beautiful weather, fifty or so entrants and Ringwood Park never looked better for Round 8 of the NSW Championship on August 9. The course for the day was the same as used for the Australian back in November 2014 and it provided close competition again.

Championship leader Malcolm Oastler (OMS28) has had a vice like grip on the trophy so far and that doesn’t look like changing anytime soon, setting the pace from the first run of 35.75s. Coffs Coaster Dave Morrow (Krygger Suzuki) worked hard to stave off the inevitable while pursued by a healthy pack of sports cars in the form of local driver Keith Hammond (Debron Sports), Wollongong’s Peter Brown (BAP Clubman) and ACT fastman Zac Le Lievre (Westfield Megabusa)

Oastler put the matter beyond doubt with a super smooth third run (33.95s), a little outside his course record set back in November perhaps, but good enough to take home the silverware from Morrow (36.97s) and Hammond (37.53s).

Peter Brown managed to grab fourth outright by just three hundreths to head off Le Lievre with Kevin Lewis in the immaculate Cheetah Mk8, close by in sixth outright.

In conventional Road Registered, Brett Manderson dropped his guard for a moment and co-driver Sam Hollier pipped him for the win in the Fairmont Ghia. Daniel Hollier (Subaru) took out the RRAWD and Dave Watkins provided plenty interest for the good crowd pedalling the Chev Legend.

Fastest lady went to Joanne Bell (Mini) and best Junior was Austin Stallard (Holden Gemini). With six runs, no delays and only a few minor “offs” it probably doesn’t get much better. As Malcolm Oastler said later “Hillclimbing is such good fun I don’t know why more people don’t do it”.

With just two rounds to go, MO and his trusty OMS28 (aka the “Beast of Bega”) are in devastating form firmly ahead of Dave Morrow and Ron Hay at the top of the leader board. AB

No Youtube videos were uploaded for this event. If you know of one please submit the link to the website editor to have it attached to this page.