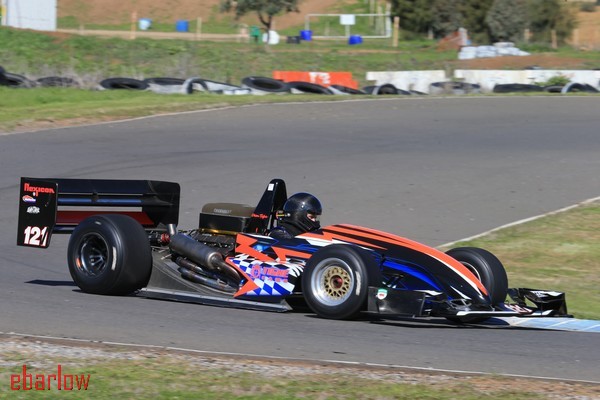 THE LEAD IS ALL TIGHED UP!

Following an outstanding success at Grafton in the last round, Queenslander Dean Tighe was a man on a mission to grab the outright lead in this year’s CAMS NSW Championship at Tamworth’s Oakburn Park Hillclimb. This aim was helped when points leader Daryll Watt had an engine go sour in Saturday’s practice session and was forced to withdraw.

In fine conditions, Tighe set the pace in his Dallara/Judd despite not having seen the tight layout before, laying down a string of 30 second passes before setting FTD of 29.71s on his fourth run. Mudgee’s Doug Barry showed his characteristic determination in the Lola T8750, even tossing it across the line backwards on one attempt but could do no better than 30.72s to wrap up second outright.

Kempsey’s Darren Read is fast coming to grips with the Hayward 09 and came away with a credible 30.83s final run to keep the pressure on the leaders and improve his position in the overall points chase. Dave Morrow (celebrating the thirtieth year of his Krygger/Suzuki in style) is always a threat on the short courses and laid claim to fourth outright, just five one hundredths ahead of Ron Hay (Synergy Dallara).

Kelly and Duncan Handley were both smoking the tyres on the Nissan Leaf with Duncan getting the nod from the timers. Steve Purdy (Little Red Midget) went close to the Sb record while John Gilbert (Commodore) improved on his Early Model Improved Prod record.

Paul Finch (PRB) set a new 2B Marque Sports record while Nathan Abbott had the VW Beetle performing well to edge out Steve Brydie and Warwick Berge who were sharing the Datsun 1200. Jason Newling (Subaru) was best in Late Model IP ahead of Craig Albertson (XR Turbo) and Steven Brown (Evo).

Paul Carroll (Elise) was unopposed in RRNL up to 2.5L while Geoff Brisby (HSV Clubsport) held on to RRNL over 2.5L ahead of Liam O’Brien (HSV GTS) and a hard charging Brett Manderson (Falcon EL). Daniel Hollier wasn’t put off by the lack of a suitable vehicle for RR AWD and pressed the Honda CRV into service to keep those points rolling in. In the smaller Sports Sedans, David Wrightson (Mini) took out the 1301-2000cc class and Gwyn Mulholland (Anglia) claimed the over 2000cc class.

With just three rounds to go, Tighe leads the NSW Championship (and we are checking the record books to see the last time a Queenslander did that) ahead of Doug Barry and Darren Read. As Dean related later “I’m really pleased to be leading the Championship but it was a real shame that Darryl wasn’t able to make it today”.