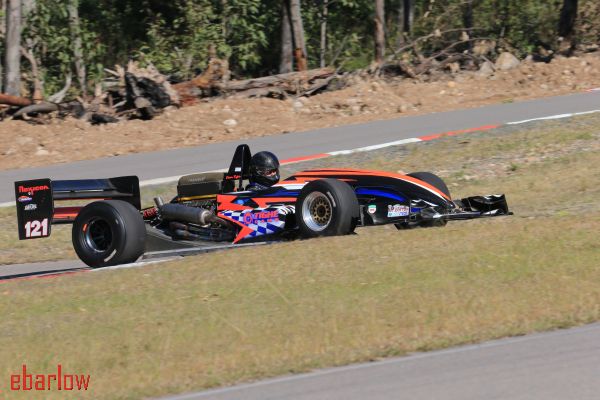 Overnight rain had washed down Ringwood’s tight turns so the forecast was for rapidly improving times as the day developed. A good field of sixty-five competitors lined up to take the green light for what proved to be a top day of hillclimbing.

Coming into the round (not having seen the venue previously) Qld regular and points leader Dean Tighe (Dallara/Judd) was expected to face stiff opposition from North Coast regulars Darren Read and Dave Morrow with Mudgee’s Doug Barry always in contention.

First run saw Tighe quickest on 41.73s with Doug Barry (Lola T8750) and Darren Read (Hayward 09) in close attendance. On the second run Barry was quickest (38.16s) from Read with Tighe copping a penalty for nudging a flag.

As the times quickened, Read staked his claim (35.89s) to lead Tighe while Barry copped a penalty and Dave Morrow (Krygger Suzuki) moved to third outright. The fourth run saw Tighe close the gap but Read still held the advantage.

It all came down to the fifth and final run on a rapidly improving but not yet ideal track surface. After some hasty improvements Dean Tighe pegged FTD at 35.39s as Read held on to second outright and Barry settled for third outright on 36.42s with Dave Morrow back in fourth.

Canberra’s Zac Le Lievre (Westfield Megabusa) had worked his way to fifth outright and best of the Sports Cars (38.31s) just ahead of Amy Mrcela (Minetti Monster, 38.40s) – best of the ladies as well. Ron Hay (Synergy Dallara) was next, ahead of Peter Brown (BAP Clubman) with the Tin Tops of Phil Heafey (Mitsubishi Evo) and Garry Ford (Escort) rounding out the top ten.

The “Silver Surfer” aka Paul Finch (PRB) laid claim to 2B Marque sports ahead of Bob Wootton (MGB) and John Engish (MX5). In 2F Prodsports Ron Gallagher was quickest ahead of co-driver Barrie Coady in the MR2 while Grant Liddell was unopposed in 3J up to 1600cc.

John Gilbert continued his winning ways in 3J over 3000cc while Jason Newling (WRX) survived a brush with the fencing at the top of the hill to take out Imp Prod SV ahead of Steve Brown (Evo) and Glenn Mason (R32 Skyline).

RRNL classes were well supported with Graham Orr (CRX) coming out on top ahead of Rick Vincent (Elise) and Matthew Cameron (Skoda) in the up to 2.5 litre class. Geoff Brisby (HSV Clubsport) took out the over 2.5 litre class ahead of Sam Beeby (VW Polo) and Stephen Fowler (VX SS Commodore).
Sam Hollier (WRX) was quickest in RRNL AWD ahead of Daniel Hollier (WRX) and Bruce Albert (WRX).

The win strengthens Dean Tighe’s position in the lead of the NSW Championship by a handy nine points from Doug Barry with Darren Read just five in arrears – just two rounds to go. AB

As usual MGCCN ran a good show with five runs and an early finish all of which was appreciated by the travellers from out of town. The additional awards handed out at the end of proceedings were much appreciated.