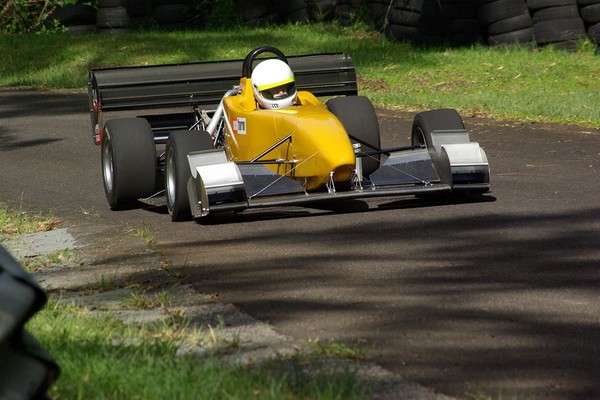 For over fifty years WSCC’s Huntley Hill has been a classic hillclimb venue. The sparingly used colliery road is a huge challenge, steep sharp and narrow – an uneven ribbon of just 658 metres of bitumen. The Brave grab a deep breath and exhale about 18.54s later – as Tim Edmondson did back in 2011 when he set the current FTD. At that pace, disaster is never far away.

Oastler set FTD (20.14s) on his second run before an untimely suspension collapse brought proceedings to an abrupt halt, leaving the door slightly ajar for Doug Barry as Ron Hay held on to third outright.

Doug Barry was not to be outdone, on the final run he launched well, with the Lola wheelspinning as it went out of sight through the first turn…only to run out of road, clip the right side Armco then into the left side fencing. End of another spectacular attempt, fortunately without personal injury.

Ron Hay kept his best for last to finish third outright while Phil Heafey (Evo V1, 23.43s) claimed Top Tin Top as he edged out Wayne Penrose for fourth outright and David Isaacs (Evo V) set a new class record as he slipped in ahead of Dave Morrow. Neville Shears (GTR) was impressive to get the best of Steve Brown (Evo V111) with Matt Halpin (Torana) rounding out the top ten.

Neil Depau (Radical Prosport) was quickest in 2A Sports while in Marque Sports James Pearson (RX7) broke the longstanding record set by Gordon Campbell back in 1996 to edge out Paul Finch (PRB) and Bob Wootton (MGB).

Chris Bolton (VW Beetle) was quickest in the 2-3L Sports Sedans while Ron Gallagher (Capri) was on top in Imp Prod 2-3L. Theo Poteris (Commodore) took out Imp Prod 2-3L while Sam Hollier has cornered the market in EA Falcons ( this one is red and black) as he booted the LM Imp excl FI and AWD record down to 28.81s before having engine troubles.

Geoff Brisby (Clubsport) got the best of Dave Williams (Commodore Ute) and Liam O’Brien (HSV GTS) in NLRR over 2.5L. Commiserations to Jose Abreau who unfortunately went bush in the esses, while as mentioned earlier Neville Shears (GTR) was awesome off the line to claim RRNL AWD from Greg Thompson (Skyline) and Andrew Camilleri (Evo7).

Fastest Junior was Riley Macqueen (Commodore) and Fastest Lady was Sheridah Stenlake (Skyline).
As the two quickest cars and drivers loaded up at the end of the meeting Malcolm commented ruefully “it would have been nice to have won without damaging the car, but I’ll take it all the same.”

Heading for Round 4 at Kempsey, Oastler leads the Mantic Clutch NSW Hillclimb Championship on 42 points ahead of Doug Barry (33 points) and Ron Hay (27 points).