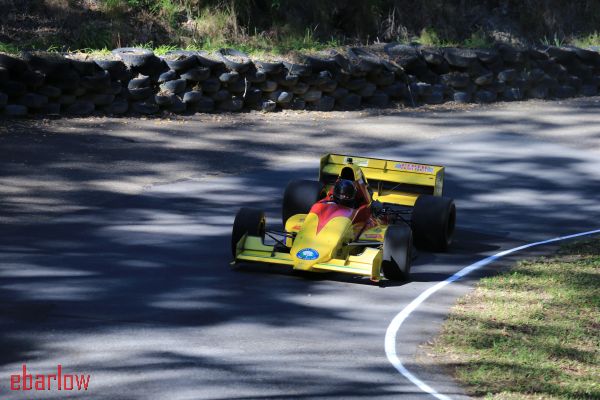 Fine weather brought the Kempsey Car Club workers out in droves for a packed grid that witnessed several new records being set on the historic Old Pacific Highway in Northern NSW.

After a nasty crash at Huntley at the last round, Mudgee’s Doug Barry (Lola T8750) was no certainty to make the starting field. But with Malcolm Oastler and Ron Hay likely to be absent there was added incentive for a few trademark late nights of workshop toil. As could have been expected, Doug soon settled in for a fuss free demonstration that left FTD at 23.603s, just a few tenths outside his outright course record.

Gwyn Mulholland (Anglia) added his name to the record books for Sports Sedans 2-3L. In Imp Prod Grant Liddell (Datsun 1200) lowered his record for up to 1600cc, Stephen Sauer was quickest 1601-2000cc, Ron Gallagher (Capri) best in 2-3L Imp Prod while travellin’ Man John Gilbert kept up the momentum by lowering his record to 29.63s in the over 3L slot.

The win moves Doug Barry into the lead of the Mantic Clutch NSW Championship on 47 points, ahead of Malcolm Oastler on 42 points with Ron Hay 27 points. The next round is Grafton on June 11.