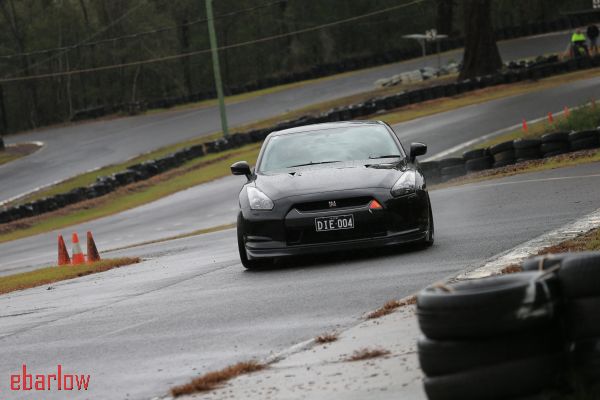 Heavy rain on the NSW North Coast over the May long weekend caused a massive upset at Grafton’s Mountainview hillclimb. Shock Horror – FTD was set by a Road Registered car!

Sydneysider Neville Shears grabbed the opportunity with both hands and put the famed qualities of his Nissan GTR-R35 (and no little skill it must be said), to great effect leaving the established favourites floundering in his wake. His cracking first run of 56.36s was crucial to the result which has seen him acquire Hillclimb legend status.

Local driver Matthew Read (MTR1) continued the run of surprises in his unconventional FWD bike powered special, setting second fastest at 57.69s. At least the purists were relieved – it is an open wheeler after all!

An early tip with the bookies was Phil Heafey (Mitsubishi EVO) who tried hard but could only manage third outright with a best run of 57.60s. The 2016 NSW champion, Queenslander Dean Tighe gamely scrabbled for traction in the Dallara/Judd for a best of 58.24s (a class win) ahead of Dave Morrow (Krygger Suzuki).

Also travelling from Queensland were husband and wife team, Ken and Pauline (Fastest Lady) Graham, only fractions apart in the Datsun 1600. The good handling Datsun a good advert for the family business. Matt Halpin (Torana) was next putting one up on the duo of Doug Barry (Lola T8750) and Ron Hay (Synergy Dallara) as they rounded out the top ten. The “Stealth Bomber” aka the Nissan Leaf with Duncan Handley aboard was next.

The trying conditions provided a reward for those who were willing to chance their arm or as Neville Shears commented later “He who dares wins”. With just three rounds to go Doug Barry leads the Mantic Clutch NSW Championship on 53 points ahead of Malcolm Oastler, Ron Hay closely followed by a fella named Shears. The next round is Tamworth July 16.