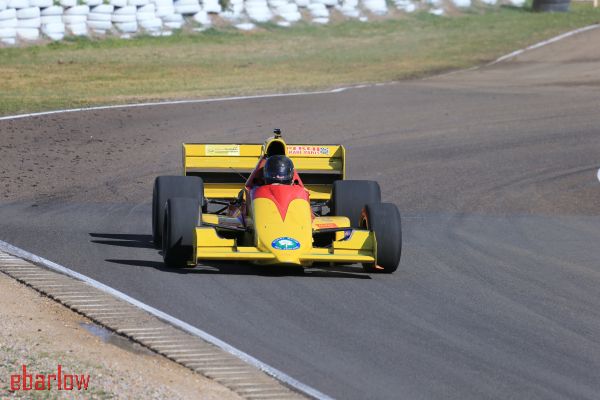 Round 6 of the Mantic Clutch NSW Championship at Tamworth and Saturday’s practice is as damp and dark as the faces of the openwheeler drivers. The only bright spots are the capacity field and the quietly confident winner of the last round, Neville Shears – keen to show the abilities of his Nissan GTR R35 in these conditions…

Fortunately for the other competitors Sunday dawned sunny and the wet tyres could remain safely in the trailer. Past NSW Champion, Mudgee’s Doug Barry (Lola T8750) got off to a good start with an opening run of 33.765s to lead Dave Morrow (Krygger Suzuki) and rather ominously, one N Shears in the black GTR.

Then Morrow (aka “The Smiling Assassin”) threw down the gauntlet with a second run of 33.42s as Doug Barry went bush and allowed Ron Hay (Synergy Dallara) to squeeze in ahead of Shears and Phil Heafey (Mitsubishi Evo).

Sensing danger, Barry responded with a string of solid runs, finally setting FTD at 32.187s on his fifth attempt while Ron Hay secured second outright (32.812s) to edge out Morrow and Shears. Heafey (Evo) retained fifth outright and took the Sports sedan class win ahead of local favorite Matt Halpin (Torana). Wollongong’s Peter Brown with the Prosport on debut was next quickest.

David Wrightson edged out Joanne Bell in the battle of the Minis and Neil DePau (Radical) had the best of 2A Sports 0-1600cc only to have his day shortened by a drive chain issue. Pedalling hard was Top Junior, Riley MacQueen (Commodore), while Fastest Lady was Karen Wilson showing some flair in the Commodore Ute kindly loaned by Dave Williams (aka “Big Will”).

The win moves Doug Barry into the lead of the NSW Championship with 67 points, ahead of Ron Hay (43 points), Malcolm Oastler (42 points) and Neville Shears 38 points). Looking pleased with the result Doug Barry commented afterwards “We were pretty relieved with the way the weather worked out today; now bring on the rest of the championship”.