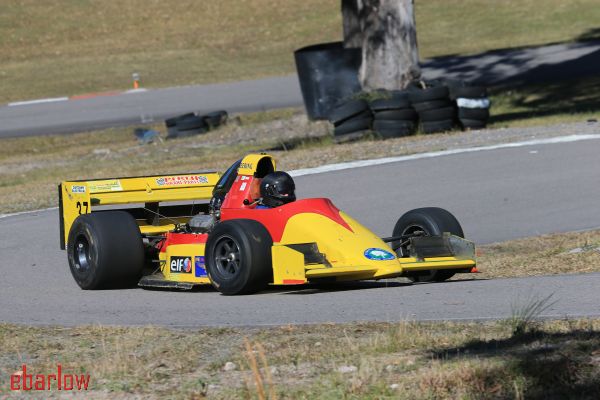 Splendid conditions were on hand for MGCC’s round at Ringwood Park, north of Newcastle on Aug 6. Championship Leader Doug Barry (Lola T8750) was the punters tip but the big Lola is a handful on the tight tracks, favored by the bike engined brigade. Further, the growing threat posed by the AWD crew is a concern if conditions are anything but perfect as we have seen at the past two rounds. Seeking a response to the increased competition led to a lengthy discussion with National Champion Malcolm Oastler. This reportedly led to a Reynard-esque rework of Lola’s rear end…so to speak.

The next run saw Barry slip into the lead (37.23s) ahead of Morrow with Mrcela, Heafey and Neville Shears (Nissan GTR R35) making up the next group. Barry continued to apply the pressure on the next couple of runs to put the result beyond doubt, grabbing FTD of 35.97s ahead of Morrow and Mrcela.

Neville Shears never gave up in the GTR, taking out fourth outright ahead of Gerard Veitch (co-driving the Minetti). A hard charging Phil Heafey had to settle for sixth outright in the Evo after paying an unexpected trip into the trackside scrub.

David Isaacs (Evo V) was next quickest with James Pearson (RX7) leading home Darval Thomas (JWS). It was good to see Scott Tutton (Evo111) back behind the wheel and in the top ten ahead of Steven Brown (EvoV111). Top junior went to Christian Thompson (JB Clubman).

Daryl Morton was quickest of the small capacity Minis and David Wrightson got the nod in the 1301-2000cc.class. Sam Hollier (Falcon) took out IMP prod Late Model (Excl FI). Graham Orr was again successful in RRNL under 2.5L ahead of the Renault Clios of Peter Lenard and Marty MaLoughlin.

A strong field in RRNL over 2.5L kept the results in doubt till the final run with Liam O’Brien (HSV GTS) coming out on top ahead of Patrick Navratil (Nissan Silvia), Sam Beeby (VW Polo Gti) and Geoff Brisby (HSV Clubsport).

Andrew Camilleri (EVO V11) was “best of the rest” after Neville Shears and just ahead of the WRX attack of “AJ” Jeske, Daniel Hollier and Bruce Albert. Duncan Handley (Nissan Leaf) set a new electric class record ahead of wife Kelly.

With one round at Canberra to go, the win cements Barry’s position at the top of the leader board on 81 points, ahead of Dave Morrow, Neville Shears and Ron Hay, who missed this event due to other commitments. It’s looking like a repeat of 2012 or as Doug commented after the event “With a few more improvements I think the Lola’s still got it”