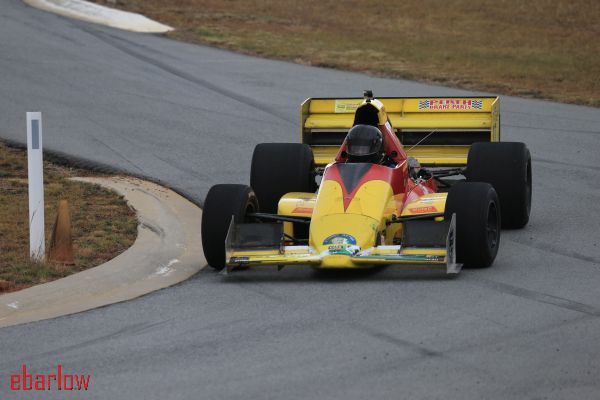 WHILE MALCOLM IS AWAY …..

After a week of above average temperatures in the nation’s capital, Sunday began with an unexpected cold snap and the hint of a shower which kept the grip level down and the competitors on their toes. Championship leader and local record holder, Malcolm Oastler was a notable absentee (last seen riding a bicycle in New Zealand) which brought some temporary relief for 2017 champion Doug Barry.

Local standout, Zac LeLievre (Westfield Megabusa) threw down the gauntlet with an opening run of 42.30s to push ahead of Dave Morrow (Krygger Suzuki – 43.34s), and a slightly worried Doug Barry (Lola T8750) struggling for grip in third outright on 44.24s. Second and third runs were more to Doug’s liking, stopping the clocks at 40.70s followed by FTD of 40.03s. Zac responded with a string of sub 42s runs the fifth of which (41.47s) netted him second outright – no mean feat.

Meanwhile, Dave Morrow was himself under fire from a fast finishing Ron Hay in the Synergy Dallara. In a vintage display, Ron grabbed third outright by just three tenths on the final run.  Dave Isaacs (Evo 9) took advantage of the absence of Phil Heafey to nail down fifth outright and Top Tin Top (43.45s) ahead of Reece McIntosh in his amazing Type R Golf (44.01s). Garry Ford in the (now) historic Group U Sports Sedan Escort was next on 44.46s just ahead of Wollongong’s Peter Brown in the Pro Sport Mulsanne.

Rob Black (Holden VXSS) top scored in RRNL Over 2.5L ahead of Liam O’Brien (HSV GTS) and the aforementioned Riley MacQueen. While Michael Cusiter was quickest Electric Vehicle in the ever so silent Tesla. Barry admitted later that he was struggling for grip in the cooler conditions but managed to find a setup that worked. The absence of Mr Oastler doubtless helped but as Doug put it “When Malcolm’s away Douggie will play”.

After three rounds, 2017 champion Doug Barry is back in the lead on 36 points, just ahead of Malcolm Oastler (28 points) and Ron Hay (27 points). The next round is at Mt. Cooperabung, Kempsey on May 13. Alan Barlow

EDITORS NOTES:
Another well run event, full credit to the team at SDMA. Five runs down and on the road all in good time.