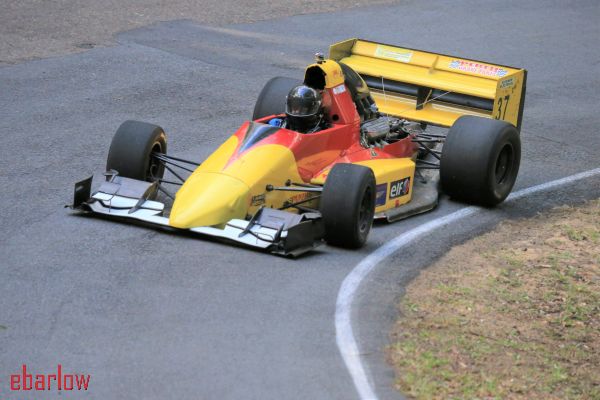 Of course motorsport isn’t sexist, it doesn’t stop even for Mother’s day, so that Kempsey Sporting CC could play host to the NSW Championship on May 13. Now somewhat like problem children, Mt Cooperabung can be a difficult proposition – a narrow winding strip of the old Pacific Highway that takes no prisoners if you are unprepared, but there are rewards for the brave, particularly in fine conditions we were lucky enough to receive.

As expected, local favorite, Darren Read (Hayward 09) did not disappoint. Setting the pace with some sizzling early runs and putting the pressure squarely on the outright record of 23.00S currently held by Mudgee’s Doug Barry in the Lola T8750.

Doug clung to second as another North Coaster, Dave Morrow (aka “The Smiling Assasin” ) in the Krygger Suzuki applied pressure. Ron Hay (Synergy Dallara) was next best of the openwheelers who were all being harried by ominous hoard of modern saloons.

Run 3 was pretty special as Barry left nothing on the table with a new outright mark of 22.917s! Darren Read had to settle for a PB of 23.587s and second outright while Morrow took third outright 25.677s.

Canberra’s Reece McIntosh (in a VW Golf – yes really) was sensational with a fourth outright time of 26.411s, ahead of Ron Hay and Neil DePau (Radical Pro Sport). Neil had to put up with some electrical gremlins early in the day but recovered well in the end.

Timothy Weston (Mercedes AMG) also shook the establishment on the way to seventh outright ahead of Matt Halpin (Torana). James Pearson (RX7) was next quickest with Garry Ford (Grp U Sports sedan) rounding out the top ten.

Mick Arts (Jasman) was on top in 2A Open Sports over 1600cc, Jeff Nichols (Westfield) likewise in Marque Sports up to 1600cc, Ron Gallagher Toyota 86) looked to be enjoying himself in 2F Prodsports while “The Rev” Wrightson was best of the Mini Sports Sedans. Bill Pearson took out the 2-3 litre Sports Sedans and in the top class Mitch Craig (Gemini) and Allan Barnes (Celica) were runners up to Matt Halpin.

Improved Production was a close run affair with Geoff Brisby (HSV) just out of the top ten ahead of Theo Poteris, Steve Fowler, Karen Wilson and Louise Hayes all in Commodores of various stripes. . Commisserations to Sam Hollier and Brett Manderson who fell foul of engine maladies in the lone Ford. Tim Blake (Subaru) was tops in Imp Prod SV.

Doug Barry was ecstatic, afterwards commenting “Darren really put the pressure on today – a PB for both of us and a new outright record is the result.”
The win cements Doug Barry’s position at the head of the leader board ahead of Ron Hay and Dave Morrow.

The top of the pointscore reads Doug Barry from Ron Hay, Malcolm Oastler and Dave Morrow.

Next Round is at Mountainview Grafton June 10.