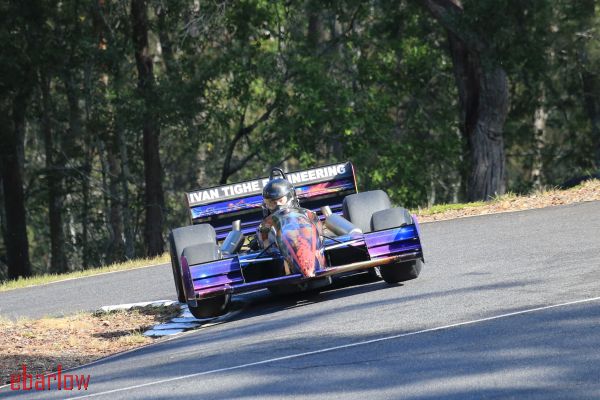 Overnight rain had left the track slippery for the initial runs at Grafton’s Mountainview but fine and sunny conditions brought on faster times as the day progressed.

Dean Tighe arrived fresh from a second place at the Queensland titles the previous week, the Dallara looking the part, with a new wing package and stunning Superhero graphics.

After a slippery first run, Tighe warmed to the task ahead with a string of 44s passes and a best of 44.25s. Doug Barry (Lola T8750) strapped on some fresh rubber but could do no better than 45.44s in reply.

Husband and wife team of Ken and Pauline Graham were into the top ten, Ken coming out in front this time in the Datsun 1600 in seventh outright, the couple separated by Neil DePau (Radical Prosport) and Craig Klingbiel (Evo 9).

In the Electric class Michael Cusiter (Tesla) retained bragging rights ahead of Duncan and Kelly Handley in the Nissan Leaf. Ron Gallagher had the Toyota 86 cracking in 2F as did James Pearson (RX7) in 2B ahead of John Engish (MX5) and Marea Semken (MGF).

3J over 3000cc went to Simon McDonald (Commodore) ahead of Brett Slingsby (Commodore) and Marty McLoughlin (Torana). Theo Poteris (Commodore SS) stole the silverware from Geoff Brisby (HSV Clubsport) by a tenth or so ahead of Karen Wilson (SS) and Louise Hayes (Clubsport).

Tim Blake (WRX) was quickest in LM Imp incl FI Joshua Paul took out RRNL up to 2.5l and Fastest Junior while Riley MacQueen (Commodore) took out the over 2.5l slot.

When Tighe was approached for the secret of his success I received an emphatic cry of “Queenslander”. Oh dear, it must be that time of the year.

In the overall pointscore, Doug Barry maintains first place with 64 points ahead of Dave Morrow and Ron Hay who are equal on 33 points after a DNS by Hay following terminal diff issues at Mount Cotton. The next round is at Ringwood Park on July 8.