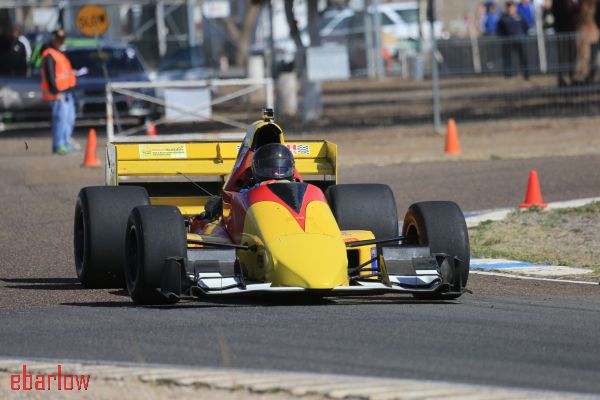 The local farmers were hoping for much needed rain but it was all fine and dry at Tamworth for Round 7 of the NSW Championship on August 19.

Current Championship leader, Doug Barry (Lola T8750) was again in good form and seemingly untouchable from the first run of 31.95s. Barry, then followed up with a string of low 31 second passes before icing the cake with an FTD of 30.95s. Nice One, Douggy!

For the minor placings, Dave Morrow (Krygger Suzuki) and Ron Hay (Synergy Dallara) traded blows all day in the low 32s area before Morrow came out on top with a final (sixth) run of 31.859s – a couple of experienced campaigners who show no sign of slowing down.

Lismore’s Garry Ford upheld the Tin Top’s honour with a time of 34.09s in the Historic Grp U Escort ahead of local club stalwart Matt Halpin (Torana).

Michelle Hanigan (WRX) was fastest lady and Riley MacQueen (Commodore) best junior.
Celebrating the win Doug Barry commented “I’m just happy to come out on top and not be outplayed by a couple of old foxes”.

There was a great rollup from Wollongong Sporting Car Club, with nine competitors taking the long drive north. With one round to go (at Huntley) how about supporting their next event 25/16 September– it’s the last for this year’s championship. Practice is available and security is provided for competing vehicles left overnight. Entries are now open.

By the way, the win gives Doug Barry an unassailable lead in the NSW Championship ahead of Morrow, followed by Malcolm Oastler and Ron Hay