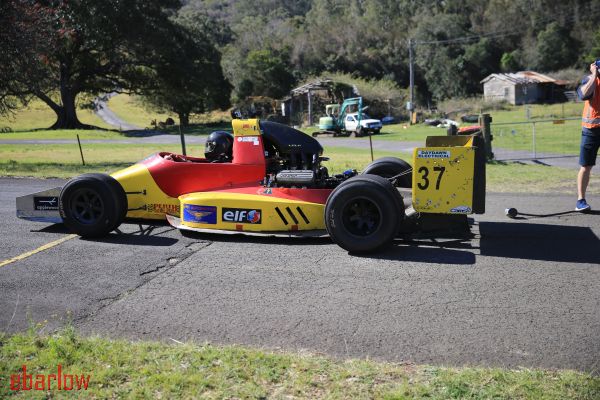 Fine but cool was the forecast for the final round of the Mantic Clutch NSW Championship for 2018. It’s September 16 and the venue was Wollongong Sporting’s Huntley climb – it’s short, narrow and bumpy and you had better have packed the horsepower as it’s the steepest climb on the calendar.

Championship leader, Doug Barry (Lola T8750), after an initial sighting run was soon into stride, with a string of 21 second passes to finally top the charts with an FTD of 21.22s. A little short of the Tim Edmondson’s outright record set back in 2011.

Standout performance of the day was provided by local VW expert Wayne Penrose (yes, it’s a VW Beetle, but not as you’d know it) with his second run of 22.78s – a new class record and good enough for second outright. Fortunately for Doug the VW’s transmission gave out and he was unable to improve on that time.

Geoff Brisby (HSV) was well on his way to a new class record when he clipped the rear of the car and was forced to retire with substantial damage, fortunately after co-driver Louise Hayes (HSV) had set her time for Fastest Lady. It looked to be a fair hit and Geoff commented that at least all the safety gear worked. A sobering reminder to all of us I guess.

John Engish (MX5) took out 2B Prodsports, ahead of Marea and Graeme Semken in the MGF. Ron Gallagher (Toyota 86) got the jump on Barrie Coady (Celica) in 2F Prodsports.

The win cements Doug Barry as 2018 NSW Champion, to add to his trophy collection from 2017 and 2012. Doug was obviously pleased with his efforts and commented later “The standard of the Championship just keeps getting tougher, now it’s a struggle to stay ahead of the Tin Tops”