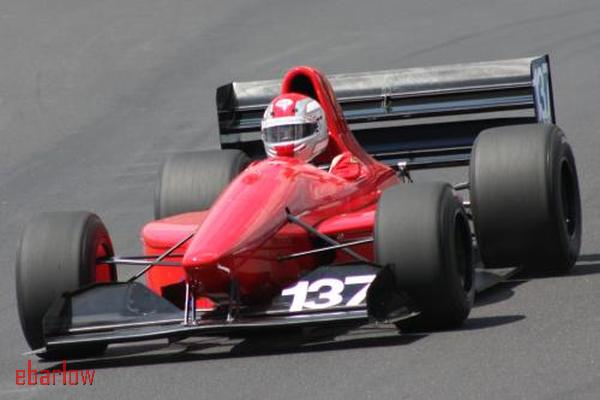 The traditional Bathurst double header got away a little later than expected due to some timing cable issues but the hard working BLCC triumphed in the end, coming up with the promised four runs.  They turned on great weather as well and a good contingent from the North.

Up front, Doug Barry (Lola F3000) got away to an early lead before Tim Edmondson put the red nose of the Gould 55B ahead and ultimately claimed FTD of 22.10s. Mudgee’s Doug Barry gave it everything as usual, even adding some white paint to the left rear sidewall on the approach to the dipper on one of his later runs.

In third outright was Victorian Champ (and ’09 National Champ), Brett Haywood making a welcome return to Bathurst in his self built Haywood 09.  His best run of 23.28 lowering Tim Edmondson’s old mark for up to 2 litre F/L cars.  Steve Hooker was next in the Jedi, while Steve Moxon and Searle Courtright took up the struggle where they left off at the end of last year, Steve coming out on top this time with a new class record with Ron Hay splitting the pair in the outright placings.