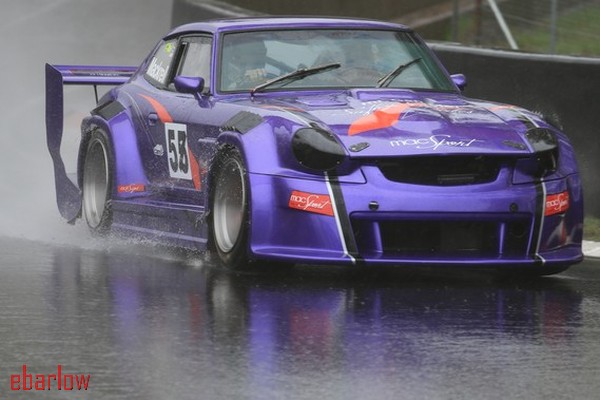 WAS IT WET OR WHAT? MACKRELL SWAMPS THE OPPOSITION!

Victorian competitor Kevin Mackrell revelled in the wet conditions handing out a stunning driving lesson at the opening round of the NSW Championship on the famed Mount Panorama Esses course. The event was held in very trying but never drying conditions with Kevin and his booming 260Z becoming an instant hit with the locals, ending months of drought experienced accross the Bathurst region.

The event was the first day of the annual double header, always a popular competiton. With defending champion Tim Edmondson still recuperating from the wrist injury sustained at the AHCC at Mount Cotton last November, the field was wide open. Sydney driver Phil Heafey (Mitsubishi Evo) set the early pace to narrowly lead Mackrell, as local driver Doug Barry (Lola T8750) fell victim to the conditions and lightly clipped the wall in Forrest’s Elbow putting him out for the day. Wily veteran Ron Hay (Synergy Dallara) was next best.

In streaming rain Mackrell took his third run, a well-judged effort of 27.89s, bagging FTD, a new Open/Closed Sports Car record and the Top Tin Top award to boot. All in a days work, really. Phil Heafey took second outright (30.10s) while Ron Hay was rewarded with third outright and best open wheeler on 30.26s. Next was a horde of AWD turbo cars with David Isaacs (Evo), Brian Rusten (WRX), Eric Thorpe (Evo) and Greg Boyle (Subaru) all enjoying the slick conditions and the chance to serve it up to the openwheelers. Steve Devjak (Commodore) halted the trend ahead of Evan McNeill (WRX) with James Morrison (Commodore) rounding out the Top Ten.

Mackrell commented later that despite appearances, the brutal 260Z is a lot better behaved than some might think, but as he hasn’t run the Esses that often in the past in the awful conditions it was a top effort. Cooper Calman took out the juniors award and Mechelle Sahyoun the quickest lady. The topsy nature of the day means that after round one, a delighted Phil Heafey leads the NSW Championship from Ron Hay and David Isaacs.