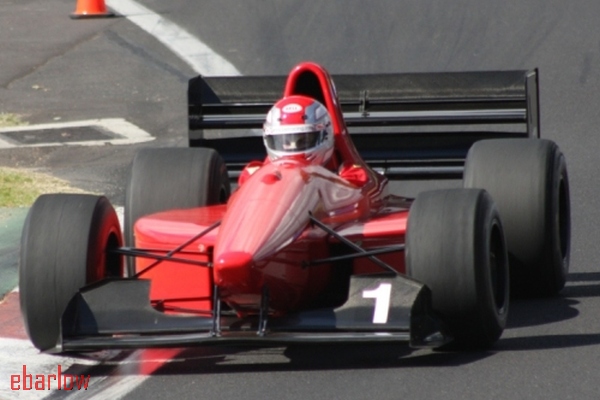 BLCC again organized perfect weather on the weekend of 17/18 April for their annual double header at Bathurst.

With Peter Gumley coming off a win at Canberra and keen to regain the Esses record it was looking like a three way tussle between him in the recently slimmed down SCV, current NSW Champion Tim Edmondson (having his first run in the ex Andrew Howell Gould) and everyone’s favourite farmer, Doug Barry.

Doug’s Lola F3000 is still a handy thing, the Esses record holder in fact.  Whichever way it would go, the spectators were not to be disappointed. PG grabbed the early lead from Edmondson and Barry.  Tim Edmonson then went to the top of the leader board with a second run of 22.60s, Gumley moved to second on 23.28s, despite a misfiring engine.

Doug Barry waited till the final run to record 24.49s, the late afternoon sun making the run through the dipper even more interesting than usual. While this was going on Stuart Inwood (Nissan GTR) ran off and hid with the Late Model record (and fourth outright) ahead of Steve Hooker (Jedi), Malcolm Oastler in the FerraBusa (sans bodywork) and Michele Guyer (March 87B).