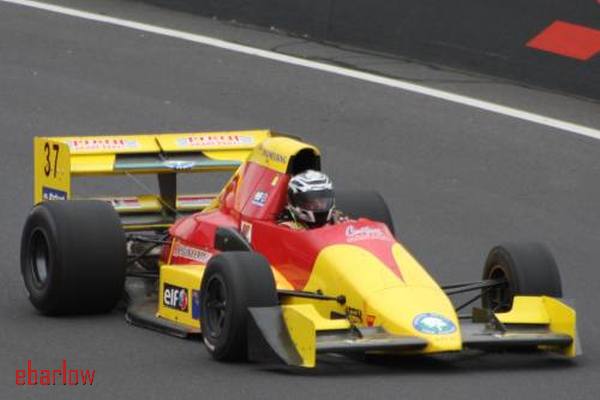 Sunday, it was all on again, Round 2, Mountain Straight, all sweeping 1.7kms of it, only problem…Rain.  The Gallery shows well enough how the hills were alive with clouds of spray.

After declining the first run, Tim Edmonson (Gould GR55B) grabbed the early advantage but a potential problem had arisen and the red machine sadly took no further part.  As the weather cleared, Doug Barry (Lola F3000) focused on the job ahead and steadily worked his times down to neat 39.84 and a well deserved FTD.

Next up, Brett Haywood (Haywood 09), and a first timer at Mountain Straight, arrived at McPhillamy Park with a huge grin (and sizable rooster tail of spray) impressing the punters no end.  Subsequent best yielded 42.14s and a class win, we hope he will be back.

Steve Hooker claimed fourth outright and a class win, ahead of Steve Moxon and Searle Courtright in the Axtell Suzuki who again battled it out, final margin 0.11s!Stuart Inwood took seventh outright (and his usual position of Top Tin Top) in the Nissan GTR, about half a second ahead of Matt Halpin (Torana).

As for the Beetles, Heath Campbell was again quickest in Imp Prod, while Greg Ward topped the smaller Sports Sedans.  Jo Bell added to the silverware with fastest lady trophy while Steve Purdy lowered another record in the Midget.

Beach Thomas also set a new benchmark in the Group C “Chickadee” Celica as did John Dean in the F/Vee.Doug B was suitably pleased and reckoned that the venerable Lola was responding to a few tweaks and “was the best it’s ever been”. In all, a top weekend of motorsport.