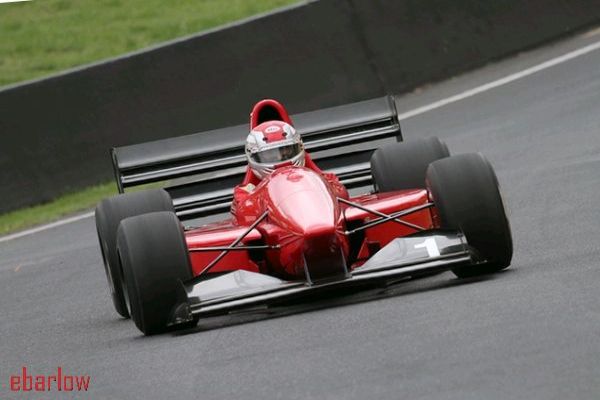 Round 3 started cool but dry to the delight of Bathurst Light Car Club as eighty five entrants faced the Mountain Straight course, one of the longest and fastest in the country.

Spurred on, Edmondson struck back to briefly lead the timesheets, only to have Doug Barry strap on a new set of rear tyres and set a rapid run of 37.43s. Meanwhile Malcolm Oastler consolidated third outright (lowering the class record by 1.2s in the process) with Phil Heafey Top Tin Top and fifth outright in the Mitsubishi EVO.

Last run of the day and with the tension mounting, Doug Barry launched like a top fueller, smoke pouring off the Lola’s rear tyres as he rocketed towards Griffins Bend where the front runners clock around 230kph! Exiting The Cutting towards Sulman Park things went pear shaped and at around 200kph, the left side tyres grazed the wall, damaging a rear upright. In typical style Doug didn’t lift and sped on to complete the run in 41.15s! As Doug said later “You’ve got to have a go… no point in not finding the limits”, clearly Doug is not one to die wondering!

Edmondson was next up the hill and with fair bit of controlled aggression was rewarded with FTD (36.98s), just 0.15s outside the outright record he set in better conditions at the AHCC last November. Amongst the new record holders were Phil Staszczyk (FV 1600), Bill McBride (BBB Clubman) Ashley Birks (Holden Gemini) and Gary Malyon in the Pitstock Special.

No one tries harder than Doug Barry and at this point he holds a slim three point lead in the NSW championship with six rounds to go. It’s going to be a hell of a battle.