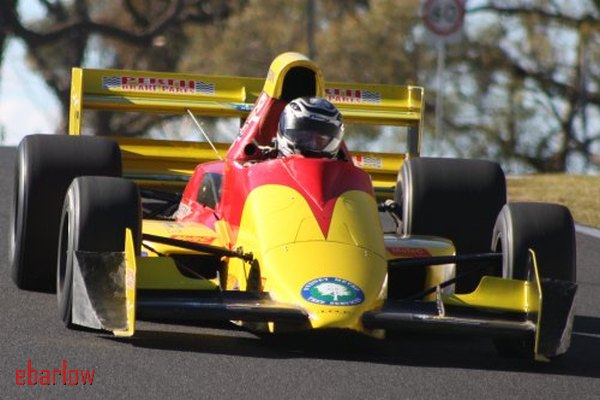 The annual double header at Bathurst always has some twists and turns and this year was no different. After a second placing in Round 3 on Saturday, local driver Doug Barry was keen to turn the tables the on Tim Edmondson at the Sunday round on May 6, on the longer superfast Mountain Straight course. Weather was foggy and crisp early but fine and warm during the day.

There is some extra pressure in the air this year as Mountain Straight is the venue for this year’s Australian Hillclimb Championship and a strong result would provide some favouritism and a good form guide for November.

The fog shrouded start saw Tim Edmondson (Gould GR55B) take the early lead only to have disaster strike when the car’s ECU died attempting the second run and he took no further part.  Doug Barry (Lola) then pounced, getting within 0.01 of the outright record, leaving FTD at 39.35s.

Edmondson had to settle for the consolation prize ahead of Ron Hay’s Synergy Dallara, while Stu Inwood astounded with a fourth outright and a new class record in the Nissan GTR. Scott Tutton also set a new record in the EVO2 and was followed by Steve Moxon, taking the double from co-driver Searle Courtright in the Axtell Suzuki. Steve Devjak (Commodore) impressed with a new record in eighth outright, ahead of Matt Halpin (Torana) and Troy Moffit in the EVO6.