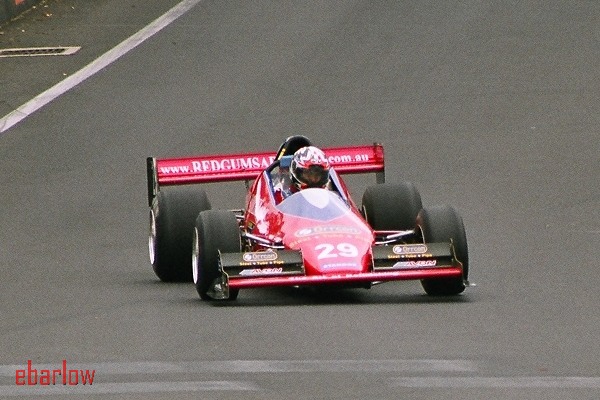 On Sunday morning, the field headed to the other side of the Mountain for a crack at the longest and arguably fastest Hillclimb in NSW. By start time, overnight rain was long gone and excellent conditions prevailed.

In 2006, Neil Farr was able to grab a win on the last climb of the day to oust Peter Gumley by just six hundredths of a second. What would happen this time?

Peter had the SCV on the money from the first run, going under the record by half a second, then another eight tenths, with a best of 41.40s on the third tour, a full 1.37s under the old mark. Neil Farr (Bowin Hay P6) was soon under the old mark but despite the inconvenience(?) of a missed time and a re-run was unable to better 42.69s, which earned him second outright.

Malcolm Oastler was unable to fix an electrical gremlin in the Jaguar Special, so we were denied the glorious sight of it powering across the mountain. An earlier pit lane discussion with PG however, had the now low-drag SCV running without side pods for its last run. According to Peter, the data logging read 198kph at the finish and a similar figure approaching the Cutting, now that’s fast!

Greg Schwenke was another to have problems over the weekend and only managed one run on Sunday – 46.79s for third outright and best Tin Top! In the smaller Sports Sedans, Donn Vidler (Mini, 58.57s) set a new record with Aden Hadley (Datsun) and Kurt Woodward also class winners.

Tom Donovan (MegaKart) was chuffed at lowering the up to 750cc F/L class record to 48.39s from Geoff Lord in the Axtell Suzuki and Denis Russell, having his first run in the Kelly Suzuki.

Martin McLoughlin (Torana) was again fastest of the over 3000cc 3J cars on 52.91s from Dave Tutton’s Torana on 53.16s and Phil Haynes in the monster XB Falcon Coupe 53.77s. Nathan Abbott (54.24s) turned the tables on the large contingent of Beetles (3J 1601-2000cc) while Craig Torrens turned the Beetle round at the finish line and suffered a little bruising to the right rear guard (54.49s) for second in class, Heath Campell next quickest. Kurt Woodward (Datsun 1200) and Ken Moffet were also class winners.

Mark Inwood and Karen Wade (Nisan GTR) recovered from a setback on Saturday with Mark stetting a new record for Late Model Imp Prod 50.50s and Karen the Fastest lady award. Glenn Parsonage (PRB) was quickest Sports Car with a new class record of 56.92s for under 1600cc 2A Open Sports.