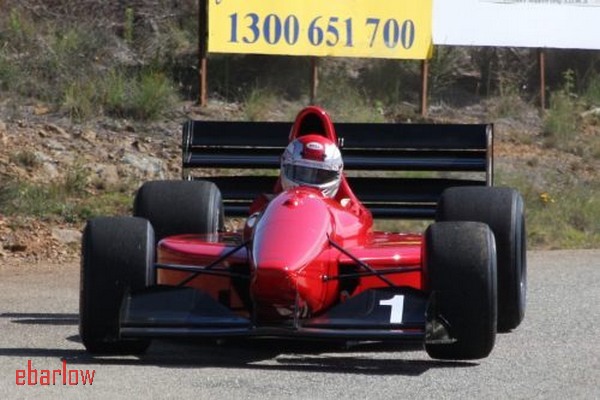 After what seems like weeks of dodgy weather up and down the coast a wet hillclimb at the nation’s capital looked assured. Happily, the team at SDMA organised a perfect day something in the order of nine new records was the result.

Reigning champion Tim Edmondson (Gould GR55B) set the opening quick time but became an early withdrawal due to an oiling issue. No matter, Tim’s second run (39.77s) was good enough to win the day. Ron Hay has parked the venerable Hay Honda this year and had his new toy – the Synergy Dallara (aka Ron’s Red Rocket) out for its maiden voyage.

Much to the delight of spectators it all worked straight out of the box and even held second outright for a time before a fast finishing Doug Barry (Lola T8750) slipped in ahead of him by all of .06s! Mind you I don’t think Ron was all that concerned judging by the smile on his face at the end of the day.

Next quickest was Malcolm Oastler with the trusty Ferrabusa (sans bodywork) on 42.26s.  Good to have Malcolm back after a sabbatical and we eagerly await the arrival of his new Dallara based project, possibly for the next round at Bathurst.

Fifth outright (and a new record) went to Steve Moxon’s 750cc Axtell Suzuki, followed by local driver Phil Pratt in the Trojan.  Nick Mason (Sparrow) and Stu Inwood (Nissan GTR, a new record) dead heated for the next slot on 44.94s, while Phil Heafey and Scott Tutton, both in Evo’s rounded out the top ten.