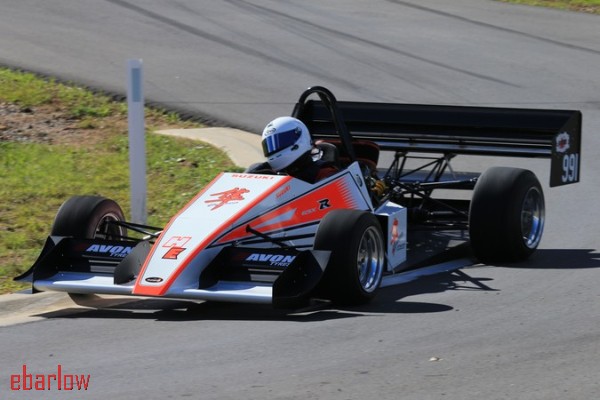 BRETT THE JET FLIES AT FAIRBAIRN!

There was a mixture of uncertainty and expectation in the air as the NSW Hillclimb Championship moved to Canberra for Round 3 on April 13. The weather was ideal and the extensively refurbished Fairbairn Park track looked an absolute picture.

The level of uncertainty arose when current championship leader Phil Heafey (Evo) was unable to attend which put the Central West’s favourite son Doug Barry (Lola T8750) in the box seat alongside Fairbain regular, Malcolm Oastler (Dallara) who was expected to challenge for FTD. Added spice came with the addition of past Victorian and Oz champion Brett Hayward (Hayward 014) and Sydney’s Ron Hay in the rapidly developing Synergy Dallara.

As expected, Malcolm Oastler got off to a great start, (clocking under 40s from the first run) and topping the sheets (38.36s) on the second attempt, to lead Hayward from Barry and Hay. The third run was the clincher with Hayward putting in copy-book display for an FTD of 38.32s while Malcolm Oastler had to settle for second outright just four hundredths in arrears. Doug Barry battled on to a best of 39.67s to edge out a fast finishing Ron Hay who has just joined the under 40s club.

Wollongong’s Peter Brown (BAP Clubman) was next (and best Sports Car on 44.14s). Taking out best Road Registered NL AWD (and best Tin Top for that matter) was David Isaacs in the WRX ahead of Daniel Hollier also in a WRX. Matt Halpin (Torana, 45.25s) was seventh outright and quickest of the Sports Sedans ahead of Greg Frame (Gemini) and John Templeton (Lancer).

Geoff Boyd steered the venerable Rilston Clubman to eighth outright and a class win, a few tenths ahead of Zac Le Lievre in the pretty Westfield Megabusa which took out the up to 1600cc Sports class from Gary Angel (Elfin). Jim Follan’s PRB was quickest in Marque Sports and Jo Bell (Mini) was quickest Lady. Geoff Bassingthwaight set a new record for Vee 1600 (47.76s) and Kev Brown (Nc Torana) was quickest in class. Steve Purdy did what he does best in setting a new Sb record in the Green Midget (48.84s).

Non logged Road Reg was again well supported with Dejan Buneta the best of the over 2500cc cars in the sinister black Supra (48.23s) ahead of Liam O’Brian (HSV Clubsport) and David Spring (Commodore). Canberra club stalwart David Yates (Capri) showed the way home in Imp Prod 2-3 Litres, while John Gilbert (Commodore) managed to slip home ahead of Adam Kane (Commodore) in the over 3 litre class. John had to try some interesting lines to take the win I am told (see gallery).

James Morrison snagged a new class record in Late Model Improved Prod (48.03s) ahead of Sam Hollier. while Tim Blake (WRX) was just outside the top ten and best of the Late Model Improved SV over 2 litre ahead of Craig Albertson (Falcon). Experienced campaigner John Riberio (Toyota 86GT) also set a new class record (48.09s) in taking out the Non Logged under 2500cc ahead of Steve Woods (Clio) and David Oliver in the Pulsar. Phil Edwards came out on top in the battle of the Sports Sedan Minis.

A relaxed Brett Hayward (who travelled with the family from rural Victoria) commented later “Yes, it certainly was well worth the trip” which brought a quick reply from Malcolm Oastler along the lines of..”I believe that a 1300cc car can win the championship…and I aim to prove it”. It’s shaping up to be a good year.

The win puts Brett Hayward and Ron Hay into the lead on equal points (25) with Doug Barry next on 23 points and Malcolm Oastler on about 20 points alongside Phil Heafey. I’m really looking forward to the next round at Oakburn Park, Tamworth on May 18.

Thanks again to the hard working (and always friendly) crew at SDMA. If you haven’t tried out this track before, pencil in the next club day. It will be worth it.

The upgrade work that has been done to the track and surroundings are a credit to all involved.