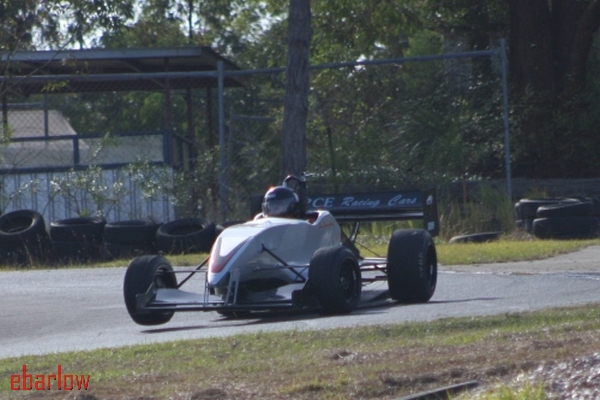 A good sized field made the trek to the northern rivers area of the state for Round 4 of the NSW Championship at Grafton’s tight Mountainview course. Series leader and eleven times state champion Peter Gumley was a shock last minute withdrawal after suffering mechanical maladies at the Queensland championship, the week previous. This certainly opened up the possibilities for a surprise result, helped by a good compliment of entries from over the border.

On the third run Tim Edmondson had an uncharacteristic spin just short of the finish. Dave Morrow improved to 46.43s while Queenslander Bill Norman bobbed up in the timesheets with the unconventional Gek Sports at 46.78s.  A light shower then intervened to slow times for most, Bill Norman being one exception, moving to a record setting second outright on 45.20s on his final run.

Further down the field in Imp Prod 1601-2000cc, Nathan Abbott and Heath Campbell ignored the slippery track as they traded places in their VW Beetles.  Nathan claimed the victory, with a new class record of 51.51s only a tenth or so ahead. Other new records were set by Brian Veal (CRX), Stu Inwood (Nissan GTR), Craig Albertson (VN Commodore) and Mark Wright (Commodore).