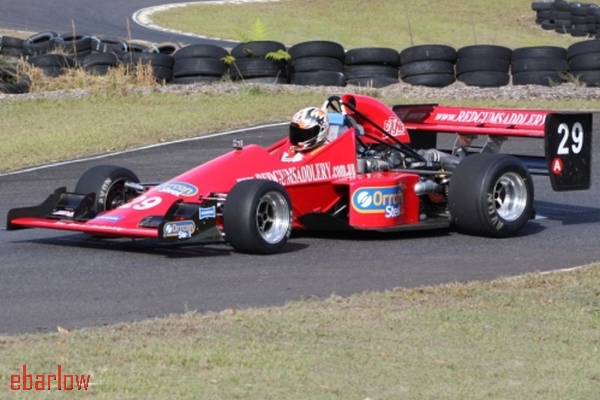 If its Queens Birthday weekend its time to head to the Northern Rivers of NSW to enjoy Grafton Sporting Car Clubs traditional hospitality. The event is placed the week after the Queensland titles and this can be a bit of a problem if you have hassles up north as Mudgee farmer Doug Barry found this year.

After knocking the corners off the Lola, at Mt Cotton “Super Doug” was required to apply lots of midnight oil (and more than a little fencing wire) in order to make the show.  But true to form make the show he did. Peter Gumley (Wortmeyer SCV) took the lead on the first run (45.20s) and was never headed.

Next was Coffs Harbours’s Dave Morrow (Krygger Suzuki), Stuart Inwood (Nissan GTR), Steve Moxon (Axtell Suzuki) with Tamworth’s Neil Farr (Bowin Hay). Heading towards the final runs, Gumley was firmly in command but there was still a little drama to be had.

On the final tour the venerable SCV split its crank case just short of the finish line but still managed to ring up FTD (43.05s) – just two hundredths outside the record!Not to be outdone Doug Barry attacked the final turn but a combination of sticky throttle switch and possibly some oil saw him spear off the last corner and gently plough the outfield with the front wing end plate.

All repairable but he had to settle for fourth outright. Neil Farr was next up in second outright and made one last charge to grab the lead only to have the rear wing collapse on the final corner, fortunately without further damage to car or driver. Now, that must have been a bit exciting as well!

Next quickest was the fast finishing pair of Ford Escorts driven by Garry Ford (Sports Sedans) and Graeme Wilkinson (a new Imp Prod record) with Jon Bown (Green Machine Altin) in tenth outright. Heath Campbell pipped “the missus” this time with a new record to be best Beetle in Improved Prod.