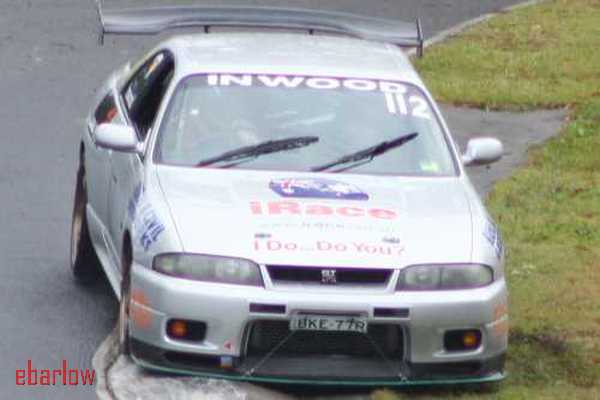 Saturday’s practice session was just great with quite a few drivers (including first time visitor Brett Hayward) at or about record pace.  Then Sunday it rained…and didn’t let up all day.

Straight out of the box, Stuart Inwood (Nissan GTR) showed the value of AWD, setting the early pace from Nick Contojohn (WRX) and Scott Tutton (Mitsubishi EVO), while the open wheeler drivers realized they were in for a very, very long day.

The conditions might have made it miserable for some, but it meant that fastest time see sawed between four or five drivers with the result in doubt right down to the end of the final run.Nick Contojohn, Scott Tutton and then Heath Campbell (VW Beetle) took turns to edge ahead but to his credit, Stuart Inwood was always able to counter-attack despite a problem with third gear.

Stu finished the eventual winner with FTD of 59.37s, less than four tenths ahead of Tutton with Campbell third outright on 59.83s. Championship leader Tim Edmondson (Gould GR55B) struggled with traction off the line but stuck to the task to finish a creditable fourth outright.

Collecting their trophies at the end of the day the ecstatic trio of Stu Inwood, Scott Tutton and Heath Campbell all agreed that when it comes to motorsport, “Bring on the Rain”