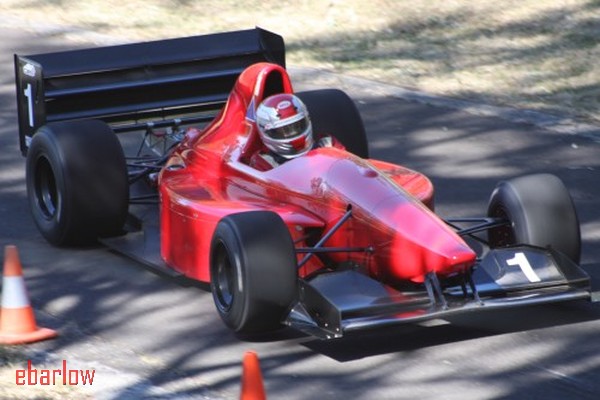 Currently trailing in this year’s point’s race, three time NSW Champion Tim Edmondson (Gould GR55B) was expected to be going all out to catch the leaders when the Championship visited Huntley colliery, near Wollongong on September 9.

Huntley Hill is one of the oldest courses on the calendar, one of the steepest and arguably the quickest with an outright record of just 18.54s (set by Tim in the Gould last year).  Fortunately, Saturday’s wild conditions gave way to sunny spring weather with a good crowd in attendance, current Championship leader Doug Barry (Lola T8750) set the early pace with a first run of 22.02s.

Next quickest were Edmondson, Ron Hay (Synergy Dallara) and Malcolm Oastler in the Suzuki powered Dallara F394. Runs two and three saw Tim on the charge, looking suitably spectacular, leaving a trail of dust and sparks to edge ahead of Doug, eventually leaving FTD at 19.77s.  Barry chipped away at his times but was unable to get the setup he required and had to settle for second place on 20.56s.

Meanwhile and almost unnoticed, Malcolm Oastler quietly dialled in some extra speed, managing to slip into third outright, ahead of Ron Hay by a couple of tenths.  Stuart Inwood (GTR) grabbed fifth outright and Top Tin Top ahead of Dave Morrow (Krygger Suzuki).  David Isaacs (Evo5) was next quickest and it was great to see local VW legend Wayne Penrose with the Super Beetle at a state round.

The track may not have been at its quickest but that didn’t stop the determined from posting a bunch of new records.  Steve Purdy in the Good Little Red Car set a new Sb record, Gary Malyon (Pitstock Holden) likewise in Group O Racing.  Keith Jones (RX7) lowered his record in Prod Sports and Bill McBride (BBB Clubby) set a new benchmark for O&C Sports up to 1600cc.

Edmondson was happy with the outcome, commenting “Congratulations to WSCC for putting on such an outstanding show with literally hundreds of spectators.  I’m pleased to have done well at an awesome event”.  Meanwhile out at Mudgee a very relaxed “Farmer Doug” has one hand on the trophy and is quietly looking forward to the grand finale at King Edward Park.