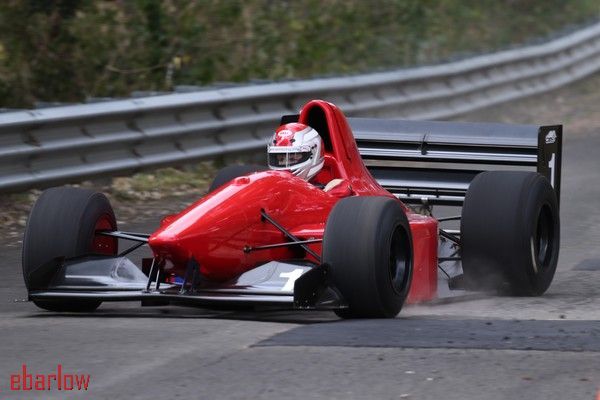 EDMONDSON GETS THE GONG!

On September 9, the NSW Championship moved to the Huntley Colliery road for a milestone event – Wollongong Sporting Car Club’s celebration of 60 years of hillclimbing at this historic site, one of the steepest in motorsport.

At the front of the field, the competition was fierce as ever with national champion Tim Edmondson (Gould GR55B) setting the early pace (20.92s) to lead Mudgee’s Doug Barry (Lola F3000), Malcolm Oastler (Dallara F394) and Ron Hay in the Synergy Dallara.

Edmondson was the only driver to go under 20s all day, leaving FTD at 19.19s which was about half a second outside his course record of 18.54s set back in 2011. Meanwhile “Farmer Doug” Barry was battling a painful wrist injury which was making gear changing difficult, his discomfort not helped by a determined charge from Malcolm Oastler. Doug was able to claim second outright while Malcolm had to settle for third by just a few tenths.

Ron Hay claimed fourth outright to head off a fast finishing Phil Heafey in his Lancer Evo who lowered the Sports Sedan/Tin Top record to 22.92s. Tamworth’s Matt Halpin has got the Torana flying again to finish in sixth outright ahead of and David Isaacs (Evo7).

Best Junior was Matthew Birks (Corolla) and Fastest Lady was Joanne Bell (Mini). New records also fell to Ashley Birks (S/S Gemini), and “Prof” Bill McBride (BBB Clubman). Accepting the trophy for FTD Tim thanked the organisers adding “Congratulations to WSCC on running 60 years at this great hill. It’s a real honour to have won the 60th anniversary event at what I think is one of the country’s best and fastest hillclimbs”.

The cancellation of the earlier Ringwood round (due to the course upgrade) leaves just one round to go. The “Grand Final” at Newcastle’s King Edward Park, October 6 will sort out the minor placings but Tim Edmondson now has a firm footing on the top step of the 2013 podium.