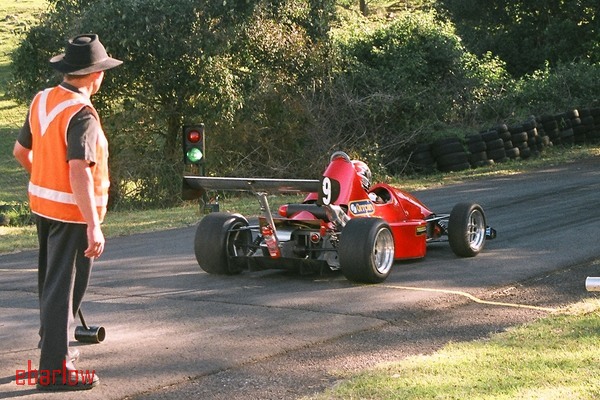 Huntley Hill is one of the steepest hillclimbs in NSW and rewards a handy amount of uphill grunt. While not the tightest of venues it can be quite demanding, particularly if you manage to stray from the ideal line. This unfortunately led to some unscheduled visits to the shrubbery, which tested the resources of the hard working WSCC team and those of a couple of drivers. At least the weather was perfect.

Local driver and series leader Peter Gumley (Wortmeyer SCV) moved further ahead in the championship standings and finished the day with FTD of 19.78s, just outside his course record of 19.42s set back in 2000.

Tim Edmondson put the Force open wheeler aside to take a crack at the long standing sports record of 23.69s, set by Murray Bingham’s Bingham Cobra back in 1986. The Edmondson Mallock 32B has recently been refurbished at Chez Gumley and looked a picture slicing up the course, finally stopping the clocks at 22.05s. A job well done.

Geoff Lord (Axtell Suzuki) took out the F/L 0-750cc class on 23.93s ahead of John Bown (Altin) and ninth outright, while Kylie Gumley got behind the wheel in the newly acquired Jedi for a creditable third in class.