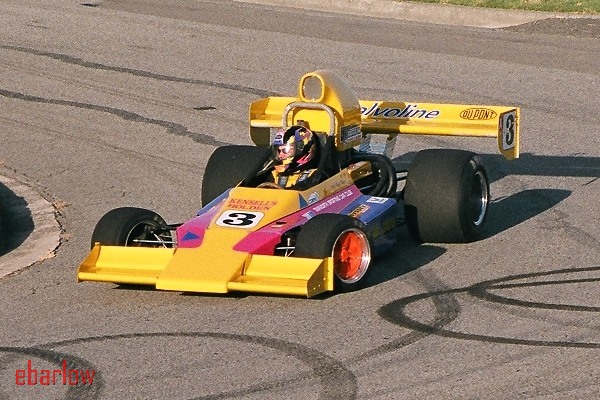 Sensational weather drew a field of almost ninety competitors to celebrate MG Newcastle’s 50th Anniversary Mattara Hillclimb at the picturesque King Edward Park, a hill full of history.  The record books show a long list of past competitors, including Brabham and the Tauranac brothers and the wealth of information in the weekend’s official program was astonishing.  From every angle, the event was a credit to the Newcastle MG team.

Dave Morrow (the Krygger Suzuki now sporting ginormous wings) was into the lead (36.73s) at the end of the first run.  Next quickest  was Steve Hooker (Jedi, 38.12s) with Neil Farr’s Bowin Hay back in third position (38.16s).  The Tamworth lad was unfazed however and quietly set about using the ample performance of the Bowin’s V8 to trim FTD to 34.74s on his final run (approx 1 second outside the outright record).  Part of Neil’s success is shown by sub 19s first timing splits on his last two runs.

Morrow was second outright but pleased with the aero add ons by setting a new record for F/L 751-1300cc of 35.73s.  Steve Hooker was next on 36.27s and a surprise entry from Tom Donovan in the ex Andrew Howell Pilbeam not far away on 37.25s.  Local driver Peter Robinson (PRS) took out the F/L 1.3-2000cc class and fifth outright.

Fastest Tin Top and a new record for Late Model/4WD cars went to the rapid Misubishi Evo of David Finnimore (39.29s) while next was Fastest Lady, Amy Mrcela in the Elfin/VW.  Greg Hunter (Elfin)was next from Alan Hindes’ Piranha and Gundy Hunt (Torana) in twelfth outright

One golden moment (amongst many) was Paul Hamilton setting a new Group O record (and 13th outright) in his very pristine, period Elfin 600.  Long time enthusiasts know that Paul won this event a total of ten times through the seventies and eighties and nineties (no less than five occasions in this very car).  It is good to see that neither driver nor car has lost any edge.