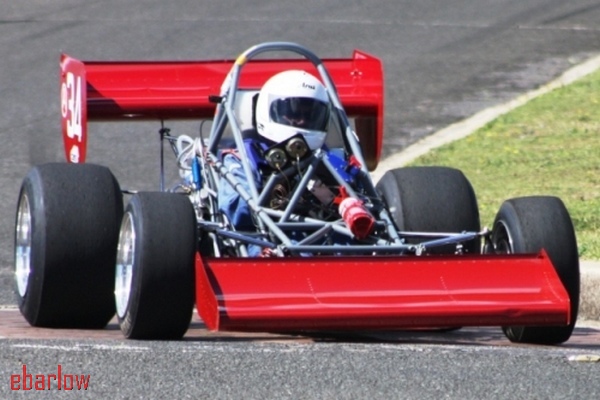 Championship contenders Peter Gumley and Doug Barry were away at doing battle at Collingrove (Congrats Pete) so the focus tended to be on the smaller, mainly bike powered specials where the competition was fierce all day long. After the second run, a pattern was starting to emerge.

Morrow then had the misfortune of damaging the front wing at the pinch, which necessitated some hasty repairs.  (At this point I suspect he was becoming a little tired of Red Bull jokes!)  He returned later in the day minus the wing’s end plate and although unable to improve his times, still clung to the lead as Moxon and Mrcela lined up for their final (fifth) run.

Watching closely from the sideline (and running later in the order), Ron Hay saw his chance.  A last gasp run of 35.95s meant a new class record and FTD from Morrow by just nine hundredths!  As second placed Morrow later quipped “Ron showed his experience – pulled out a winner on his last run, when the opposition can’t reply”!

Ron Hay was suitably chuffed with the result, commenting “the last time I recall having FTD was probably back in the early 80’s at Amaroo Park and yes it was in the same car”.  Plenty would agree that nothing in hillclimbing sounds better than the venerable supercharged six pack Honda.

Queen of King Edward Park out Foxes the Old Fox!

Newcastle’s favorite daughter, Amy Mrcela, scored victory over Coffs Harbour’s favourite son Dave Morrow in the Sunday event at King Edward Park on Newcastle’s Headland. In a tight battle Amy and Dave battled all day to achieve King or Queen of the mountain in MG Newcastle’s event. Dave’s car was suffering from a damaged front wing, damaged in the State Championship round on the previous day.

In that battle on Saturday, Ron Hay scored victory over Dave Morrow on a last run to claim a place in the record books as the 53rd winner of the famous King Edward Park. Ron driving the, RH Honda, car he built himself powered by a six cylinder supercharged Honda Motor Bike engine, drove a superb last run to claim the victory.