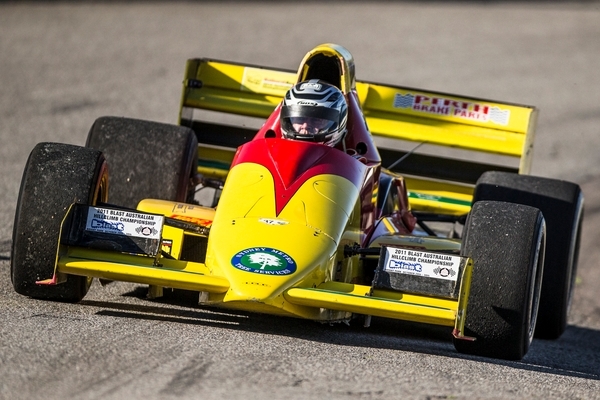 Final round of the NSW Championship was held October 6 in picturesque King Edward Park, a top spot above the beach in Newcastle.  Even though Tim Edmondson had the NSW Championship wrapped up and Doug Barry was secure in second place, third between Ron Hay and Malcolm Oastler was still to be resolved.

To add spice to the mix, a surprise entry was received from Queenslander Dean Tighe in his newly minted, Judd V8 powered Dallara. Tighe, desperate for some development miles, opted to make the trip south prior to contesting the Australian titles at Mt Cotton in a month’s time.

The day started badly for Mudgee’s Doug Barry (Lola F3000) when he broke 1st gear on the start line on his first run.  Making repairs, he was forced to miss the second run but to the amazement of all, set a new outright record on his next with a magnificent 33.52s, topping the day off with a spin on his fourth run! A better, more determined competitor you will not find.

Second outright went to Malcolm Oastler in the Suzuki powered Dallara.  After struggling with his first three runs he also pulled off a blinder, setting a new Class record of 33.99s ahead of Dean Tighe on 35.07s. Ron Hay struggled all day to get the Synergy Dallara to work but picked up enough points to secure third outright in this year’s championship.  Next placed were the local contingent of Amy Mrcela (Efin) and Peter Robinson (PRS Ford).

Phil Heafey (EVO) wrapped up the Fastest Tin Top and top Sports Sedan for the year with another very good drive and only missed the long standing record of Wayne Burden by a whisker.  Matt Halpin (Torana) was a strong second and it is good to see Matt back in action after double knee replacements earlier in the year.

Cooper Calman wrapped up Junior of the year with another fine drive in the Mazda RX7. Commiserations to Bill McBride (BBB Clubman) and Steve Cromack (Torana) who suffered misfortune and were unable to complete their first run.