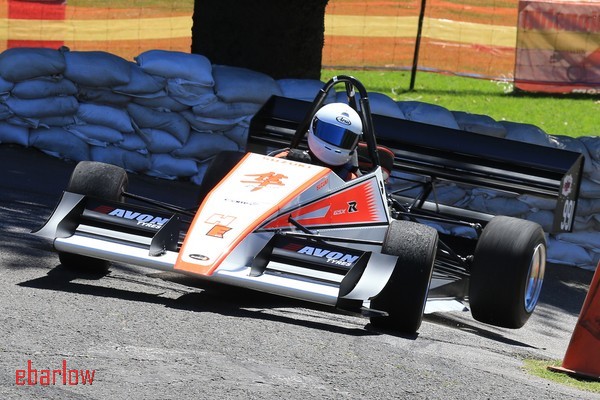 YES HE IS FROM GIPPSLAND ……. BUT WE WILL CLAIM HIM!

The MG club officials were all smiles as the sun rose over picturesque King Edward Park in the centre of the city of Newcastle. A few years earlier the event was halted by lightning strikes, no chance of that today – the event’s 57th running!

The final round of the NSW Championship was on the line with a few drivers in contention but the smart money was on Victorian driver Brett Hayward in his self built Hayward 014. Mudgee’s Doug Barry was still a chance (he never quits!) but Hayward had the momentum, after his recent win at the South Australian championships.

Hayward set the tone for the day with an opening run of 34.71s with Barry’s Lola next quickest on 36.32s with Coffs Coast veteran Dave Morrow (Krygger Suzuki) a touch behind on 36.84s. Second run and Brett spreadeagled the field, going under the course record while Barry had an “off” after losing the front wing end plate (see photos) at the Pinch and Dave Morrow had mechanical issues.

Third run and Brett again silenced the critics (not that he has any) with a new outright course record of 32.90s, sensational stuff. Doug Barry strapped on a new wing and replied with a final run of 34.82s for second outright with Dave Morrow next best.

James Pearson (RX7) was placed next (a new Marque Sports record) with Tamworth’s Matt Halpin rounding out the top ten. Dean Rigelsford (Evo) was quickest of the RR Non Logged cars (and eleventh Outright) ahead of Ashley Kerr (Evo) and Daryl Welch (Evo). While Steve Purdy lowered his record for Group Sb to 43.63s.

Tim Blake (WRX) displaced Craig Albertson (Falcon) and Ben Hall (Skyline) this time in Imp Prod SV while Tom Clemens was Fastest in RR Non Logged with his rapid Beetle ahead of Steve Woods and Simon Nicholson in another well supported class. Road Reg Non Logged over 2500cc was also well supported and Matt Lumb (Elise) set a new record and slipped in ahead of Dejan Buneta (Supra) and Geoff Brisby (HSV Clubsport).

Congratulations to Brett Hayward on a job well done. Afterwards he was full of superlatives for the event, looking out at the ocean he commented “How good is this…why aren’t more people doing it’. Perhaps hillclimbing really is one of those well kept secrets.

The win seals the NSW championship for the Gippsland based driver, ahead of Doug Barry and Ron Hay.

Images supplied by Owen Hammond Photography. For more photos from this event visit this link.