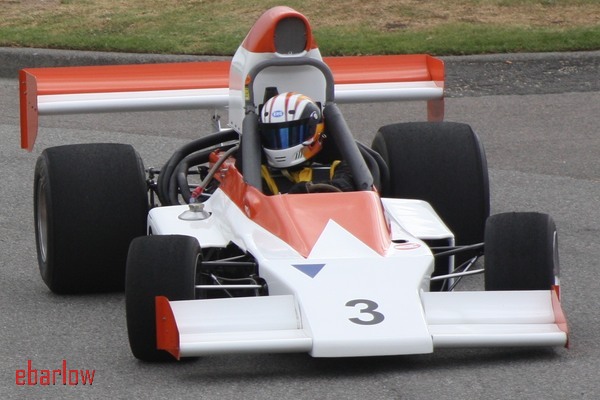 Despite rain being forecast, the course stayed fine to the end (well, almost) and the unique park and beach scenery provided a great backdrop. There was added interest this year as 2008 NSW Champion, Tim Edmondson aimed to top off a successful 2009 campaign with a last round win.

Course record holder, Farr was first into the 34s bracket only to have Edmondson counter with a 34.79s charge. Quietly, Coffs Harbour’s Dave Morrow (Krygger) began to move into contention as well with Ron Hay in the historic RH Honda next quickest. To the crowd’s delight it was coming down to the final run.

Farr made one of his trademark minimalist starts, the ample torque of the V8 and almost nil wheelspin launched him to an FTD of 34.66. Tim Edmondson had a slight hesitation with a gearchange and was unable to improve on his previous best, while Dave Morrow claimed a creditable third outright on 35.24s from “Turbo” Tom Donovan and Ron Hay fifth outright.

Despite having his first run at KEP, Mudgee’s Doug Barry is fast becoming a crowd favourite battling the uneven terrain (and the odd off course excursion) with the low slung Lola, finishing sixth outright from local emerging star, Amy Mrcela (Elfin)

Speaking of Tin Tops, the 3J (read Beetle) class was again hotly contended with seven drivers battling it out. Final victory went to Heath Campbell by 0.02s from Ben Durie with Christine Campbell next, narrowly ahead of Grant Cook.

After the event, Neil Farr looked surprised and commented “I was shocked by the result, as I have missed a couple of rounds this year and didn’t expect to do that well. The closeness of the competition today made it one of the best rounds of hillclimbing I have seen”.