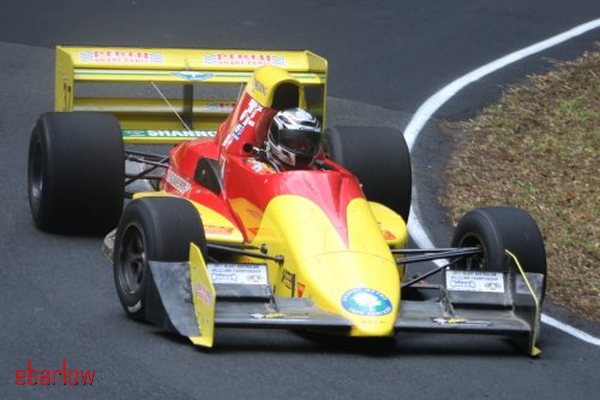 The good folk at Kempsey Sporting Car Club must have known something when they scheduled their event earlier in the year – the result – better weather, and with the improvements they have made to the ‘climb we had no accidents, lots of happy competitors and a staggering seventeen or eighteen new records being established on the day. (Yes I’ll try to mention them all, apologies if I miss someone check the results sheet attached).

The Man from The Bush, Doug Barry (Lola F3000) looks to have a definite master plan this year even down to not practicing the day before in order to save the equipment for showtime.  Seems to be working, out of the box he was quick (even allowing for an overnight shower) and systematically destroyed the course record by around half a second to leave the new mark at 22.997s.

Doug was closely monitored by a couple of wily veterans in the form of Coffs Harbour driver Dave Morrow (Krygger Suzuki) and Sydney’s Ron Hay – now working hard to acclimatise the new Synergy Dallara to the differing requirements of the hills.  The margin between this pair at the end of the day…just 0.098s!

Next quickest were the Tin Tops of Stuart Inwood (Nissan GTR) and Phil Heafey (Evo)…it’s rumoured they were the cause of the overnight rain only the plan went awry when the sun came out mid morning.  Next was local regular, the neat Piranha of Alan Hindes with the very effective awd Suzuki Swift of Queenslander David Homer seventh outright

Phil Pratt (Trojan) slipped into eighth ahead of Daryl Watt (Westfield) and Peter Robinson in the venerable PRS.  Karren Inwood was fastest lady. Current NSW Champion (and previous course record holder) Tim Edmondson was an unfortunate absentee in the Gould GR55B but is expected to be right for the next round.

The win will boost Doug’s confidence (he was looking pretty stoked at the end of the day) and he said he was looking forward to the Lola regaining its premier spot at the Esses and perhaps even Mountain Straight at the rescheduled Bathurst double header May 5/6.