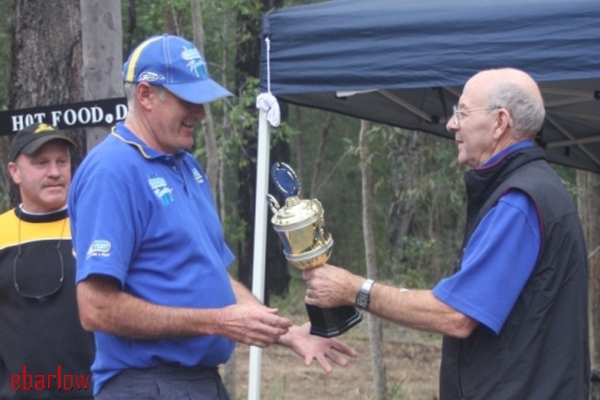 There was plenty of drama even before Round 4 of the Championship officially got underway at Mount Cooperabung on Sunday May 23.  As a section of the old Pacific Highway, largely unused since the 1970’s the sinuous course is regarded by many as a classic Hillclimb – always a challenge in any weather.

The excitement began with practice the previous afternoon.  Always keen to set a trend, Paul Finch sailed out of the final turn on the first practice run, just clipped the outside barrier and in a flash the immaculate PRB was down for the count.  At least the “Silver Surfer” was unhurt.

Current point score leader and 08/09 Champion Tim Edmondson, posted a first run below the outright record (set in the Force last year) and looked untroubled on the second run when the gorgeous Gould GR55B also clipped the barriers and crashed heavily the final turn.  Fortunately Tim only sustained a sore thumb from the ordeal but the car was beyond immediate repair.

Sunday runs started with dampish conditions and Searle Coutright (Axtell Suzuki) took the early running (30.56s) from Peter Gumley (Wortmeyer SCV) and Doug Barry (Lola F3000).  Local driver Darren Read was next, showing the way to many in his Commodore V8. Gumley, (having his first run at this hill) steadily worked his times down as the conditions warmed, shadowed by Doug Barry, never more than a few tenths away.

They were followed by the closely packed group of Courtright and Moxon, sharing the Axtell Suzuki, Dave Morrow (Krygger Suzuki), Malcolm Oastler (Ferrabusa 156) and Stuart Inwood in the amazing Nissan GTR. About that time Keith Jones thumped the barrier at the hairpin and the Capri joined the list of casualties (See crash in youtube video below). At least the recovery vehicle was getting plenty of practice.

On to the final run and even more drama. As Gumley set FTD (24.404s) and Doug Barry firmed to second place (only 0.29s adrift).  Dave Morrow took third just a few tenths away with Searle Courtright next best.  Then sadly Malcolm Oastler (whilst in fifth outright) whacked the barrier on the final turn to bring his day to a close, fortunately without personal injury, testimony to the workmanship of the jewel like Ferrabusa.