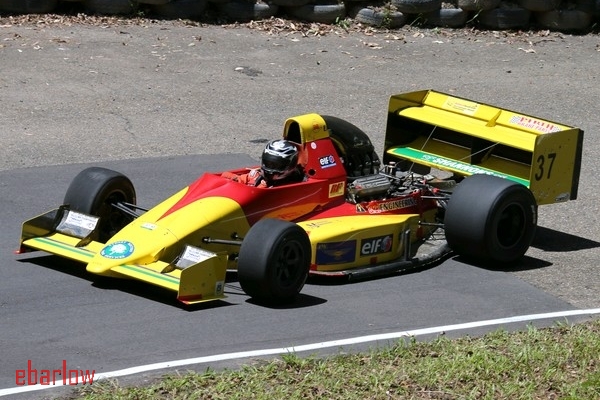 ROUND 1 TO DOUG BARRY!

Our thanks to Kempsey Sporting Car Club for putting their hand up to run the opening round of the championship at Mount Cooperabung. It was hoped that the change in scheduling might bring some warm dry weather and happily the weekend chosen was picture perfect, despite some flooding in the north east of the state occurring in the lead up weeks.

Reigning NSW champion Doug Barry brought his trusty Lola F3000 down from Mudgee to start the New Year in the best possible way, claiming FTD of 22.999s – just .006s outside the course record he set back in 2012. Doug was pushed hard all day by veteran hillclimber Ron Hay in his rapidly improving Synergy Dallara V8 (24.391s), just ahead of local surprise packet Darren Read with his new Minetti on debut (25.890s), a new class record.

Wily Coffs Coast driver Dave Morrow (Krygger Suzuki) is always an outright contender and must have been feeling a bit left out as he was shuffled back to fourth outright ahead of the Top Tin Top of Phil Heafey (Mitsubishi Lancer) 26.192s (a new record).

Next quickest was reigning national champion Tim Edmondson, steering a Mallock sports car of all things! Tim was due to drive the AHCC winning Gould GR55B but a recurrence (or is it chapter two?) of the “Bathurst” gremlins intervened and he switched to the team’s little used Mallock 32B.

About this time it was reported that Tim was seen walking under a ladder carrying a black cat and surprise, surprise the gremlins returned – the Mallock’s brakes went AWOL leaving the team with a hasty rebuild overnight. Come Sunday Tim only clocked up one full run but it was quick enough for sixth outright and gained him a few valuable points towards outright points.

The strong result means that Doug Barry takes an early lead in 2013 but there are a couple of keen drivers out there hoping to put him under pressure.