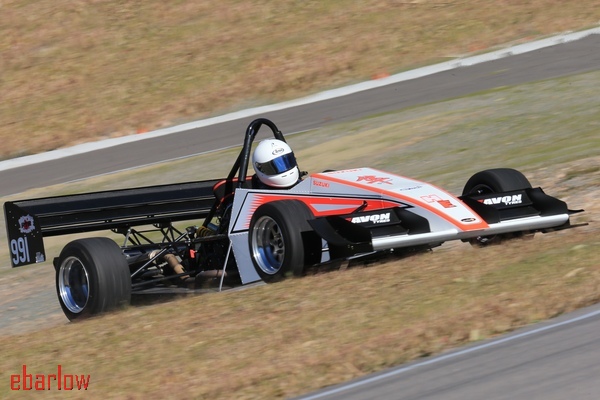 The forecast was cool and clear with the guarantee of fresh records at the “New Ringwood Park” hillclimb July 6. Round 6 of the NSW Championship was hosted by MGCC Newcastle who have spent thousands (in hours and dollars) in lengthening and rejuvenating their course north of Newcastle, the venue for the AHCC in November 2014.

Brett “Frequent Flyer” Hayward again travelled up from South Eastern Victoria and quickly set the pace in his self built Hayward 014. An opening run of 36.54s got things going with strong challenges coming from Dean Amos (Gould GR37) on 38.42s and Doug Barry (Lola T8750) on 39.17s. Hayward looked to be in a strong position as he rattled off a couple of sub 36s runs but kept the best till last with FTD (and indeed a new outright record) of 35.13s to add to his list of achievements.

“The Mudgee Master” Doug Barry looked half a chance with a super smooth third run but had to settle for second outright with a best of 35.75s. Dean Amos was headed for a boilover after a brilliant start on his third run only to have the Gould step out at the top of the hill to put him backwards into the barrier. Fortunately without injury but that brought his day to an abrupt end with third outright.

Elizabeth Robinson put in a good performance, only a few tenths behind dad co-driving the PRS, while Wollongong’s Peter Brown was quickest 2C car ahead of Cooper Calman (Best Junior) in the Marque Sports RX7. Stephen Butcher was able claim bragging rights from Phil Stasczyk in Formula Vee, while Geoff Boyd took out 2A Sports over 1600cc in the Rilstone Clubman Improved Prod. 1601-2000cc was well supported With Steve Sauer’s Escort getting the upper hand over the always spectacular Nathan Abbott (Beetle), Steve Brydie (Datsun 1200), Glenn Torrens (Beetle) and Warwick Berge co-driving the Datsun 1200.

John Gilbert (Commodore) took out Imp Prod over 3000cc from Martin McLoughlin (Torana), Adam Kane (Commodore) and Simon Gray (L34 Torana). Mitch Craig took out the small Sports Sedans while Phil Edwards (Mini) was quickest 1301-1600cc ahead of Jo Bell (Mini). Ron Gallagher was high stepping in the Capri in Nc, while Steve Purdy took out Sb in the Midget with Bob Wootton (Sc) doing likewise in the Lotus.

Gary Crilley (WRX) was quickest in RR AWD ahead of Daryl Welch (Evo), Daniel Hollier (WRX) and David Isaacs who had an unfortunate “off” on the way down the hill. Examining the split times at the end of the day Hayward commented that he was happy with his performance but would not discount a strong challenge from the “Big Cars” later in the year as the track surface matures.

The win cements Brett Hayward’s position at the top of the NSW pointscore on 67 points ahead of Doug Barry (50 points) with Malcolm Oastler and Ron Hay both on 42 points.

for more photos from this event please visit this link