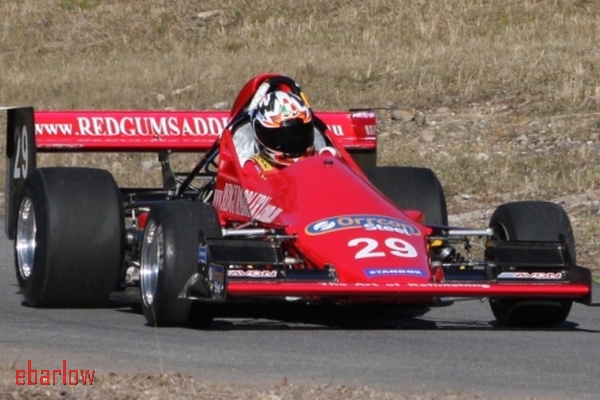 GUMLEY TOO GOOD AT RINGWOOD!

Heavy rain in the lead up to the weekend had the locals worried but Clerk of Course John Collins reached up his sleeve and pulled out two perfect sunny days for Round 7 at Ringwood, just north of Newcastle on August 1.  A good field and a strong contingent of open wheelers at the front could only mean a great event for competitors and spectators.

Defending champion Tim Edmondson has been ”Forced” (pardon the pun) to enter the spare car after damaging the Gould earlier in the year.  The opposition hasn’t had it all their own way either with Peter Gumley cracking the crankcase in the SCV at Grafton and Doug Barry forced to wave his magic wand after an off before at Mt Cotton.

Gumley set the early pace in the Wortmeyer SCV until a shattered supercharger drive stopped him on the start line and threatened to put him out of the game.  Peter and crew quickly replaced the damaged pulley and calmly soldiered on (with reduced boost) to take FTD of 28.30s – just three tenths off the outright record.

Edmondson (Force PC) gave chase, with local driver Peter Robinson (PRS Ford) breathing down his neck.  The pair traded places all day, Edmondson pushed to setting a new class record in order to nudge Robinson back to third outright.  Doug Barry manhandled the Lola F3000 around the tight layout to grab the next spot with Steve Moxon (Axtell Suzuki) and Ron Hay (RH Honda) both managing the impossible – dead heating into fifth outright!

Elizabeth Robinson (co-driving dad’s PRS Ford) gave a talented display to be next quickest ahead of Francesco Mangano (Jedi Mk4) and Searle Courtright (co-driving the Axtell Suzuki).  There was a welcome return for Malcolm Oastler (Ferrabusa) after a serious “off” earlier in the year and Stuart Inwood (Nissan GTR) managed to break his class record and continues to keep an iron grip on the Top Tin Top award.

A new record also to Billy Jones (RX7), Joanne Bell has moved ahead in the Ladies Class and Andrew Frost was not only the quickest registered Junior but claimed the up to 1300cc Sports Sedan trophy as well.