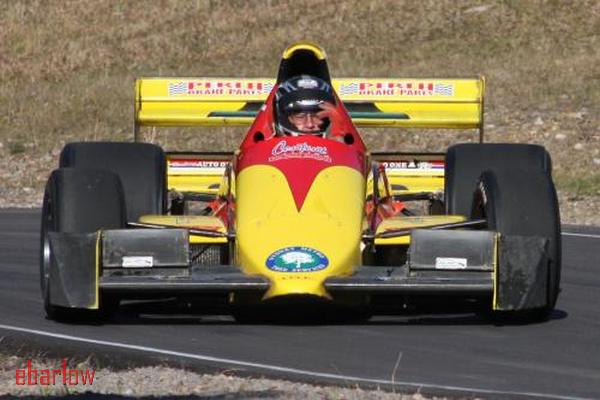 Round 7 of the NSW Championship was held on 31st July at the recently resurfaced Ringwood Park venue just north of Raymond Terrace.  Immediately, that “Man from Mudgee”, Doug Barry took an instant liking to the new surface and was again able to spring a surprise on Tim Edmondson, the current championship leader.

Tim Edmondson had entered his nimble bike powered Force PC instead of his usual mount but as crew chief, David Hill observed later, the big cars have a surprisingly good history on this hill with Peter Gumley and Neil Farr two good examples.

Doug Barry (Lola F3000) fired off the initial warning shot (29.92s) to lead the first run when the Edmondson machine failed to start with a mechanical malady.  Edmondson later recovered with a handy run (29.11s) but by then Doug Barry was warming to the task and posted a third run (and FTD) of 28.81s.Not far behind, Searle Courtright and co-driver Steve Moxon (sharing the 750cc Axtel Suzuki) swapped places all day with Searle getting the upper hand on this occasion (29.84s) for third outright with Steve next.

Long time competitor, Peter Robinson (PRS Ford) grabbed fifth outright after an uncharacteristic spin (see photos, no you can’t get away with anything) to finish ahead of Nick Mason in the beaut sounding vtwin Sparrow, from Frank Mangano who always gives good value in the Jedi Mk4.

Tamworth plumber, Matt Halpin (Torana) brought the crowd to their feet, pulling off some desperate two wheeling maneuvers (if you don’t believe me see photo) to edge out Bathurst’s Stuart Inwood (Nissan GTR) by just one hundredth of a second for Top Tin Top and Sports Sedan honors.  Scott Tutton (EVO2) was next best, a tenth or so behind in tenth outright.

The Championship has been a closely fought affair this year and with just two rounds to go the margin between Edmondson and Barry is down to a single point.  Collecting his trophy, Doug Barry thanked the MG Newcastle crew for the new surface, pleased that the result keeps the championship well and truly alive. At this rate I am eagerly awaiting the Huntley and King Edward Park rounds.