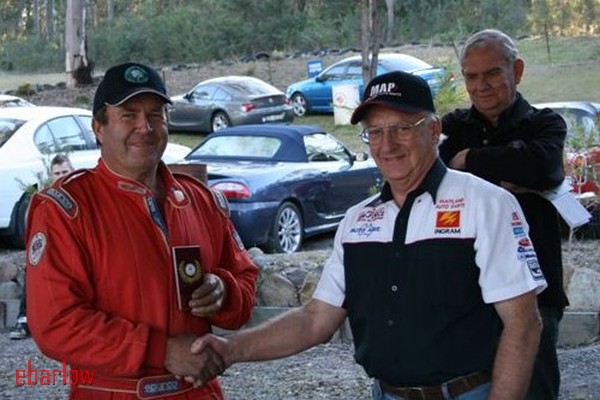 DOUG’S TOO GOOD AT RINGWOOD!

Mudgee’s favourite son, Doug Barry has become a short priced favourite with the bookies after a good showing at MG Newcastle’s Ringwood Park just north of Newcastle. Conditions on the day were ideal and competition was fierce with any of half a dozen drivers likely to claim the honours.

Driving his trusty (and sometimes dusty) Lola F3000, Doug soon grabbed the advantage, reeling off a couple of quick early runs to post the FTD of 28.30s, just three tenths outside Peter Gumley’s longstanding course record.  He was closely shadowed by Ron Hay (Synergy Dallara) who is rapidly coming to grips with his new mount while Coffs Harbour’s Dave Morrow (Krygger Suzuki) threatened to grab the silverware on the last run (as he has done a few times before).

Malcolm Oastler officially unveiled his impressive new Dallara/Suzuki, posting a solid fourth outright before succumbing to an engine malady. Meanwhile Daryl Watt is becoming a favourite with the spectators as he explored the handling limits of the ex-Edmondson Force PC on a couple of occasions on his way to fifth outright.

Next was Maitland’s super smooth Peter Robinson (PRS Ford openwheeler) who just managed to edge out the Tin Tops of Stuart Inwood (Nissan GTR) and Matt Halpin.  Matt was up to his customary trick of two wheeling the Torana round the last corner, an act which was really catching on by the end of the day. Karen Inwood (Nissan GTR) took out the fastest lady award while Keith Hammond from Newcastle was quickest junior.

As Doug Barry said later “it would have been good to break Peter’s record but as you could have thrown a blanket over the first four or so, I am delighted with the win”.  At the presentation Doug also dedicated the win to the recently deceased MGCCQ and hillclimbing stalwart John Davies.