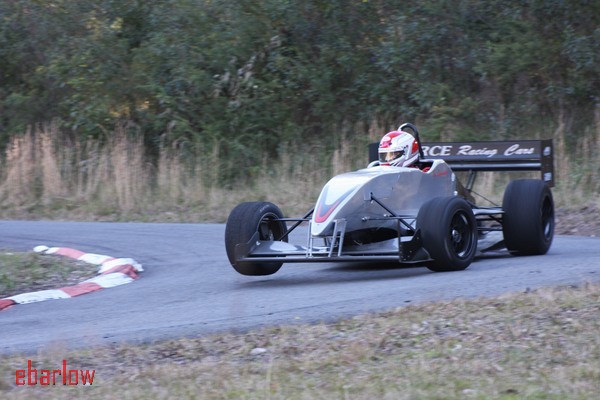 August 2, MG Newcastle played host to a large field for round 6 of the NSW Championship at the popular Ringwood course just north of Newcastle. In keeping with the clubs organizing skills, perfect weather had been arranged as well.

Steve Moxon (750cc Axtell) ignored the script however, with a sensational first run of 29.61s to lead by over half a second. The “Mudgee Man” (aka Doug Barry) in the Lola F3000 decided to spring his own surprise by posting the second quickest, from Edmondson, local ace Peter Robinson (PRS Ford) and Ron Hay in the historic RH Honda.

Then disaster struck for Moxon as CV joint problems halted his charge and Tim Edmondson responded with a couple of 29s runs, topping off his day with a final of 28.74s – a new class record and FTD.

Moxon could only watch as Ron Hay inched closer before a niggling problem ended his day as well. The duo of Barry and Robinson continued to work at the deficit. but in the end had to settle for fourth and fifth outright, only a few tenths behind.

As a result of the CV problem Searle Courtright (co-driving with Moxon) was left stranded in seventh outright with Nick Mason (Sparrow) rounding out the top ten.

Top Tin Top went to Heath Campbell,(the best of the VW Beetles) in a typically sideways drive (narrowly ahead of “The Missus”, Christine) and Ben Durie. Best junior was Ryan Bates (Charade).

The result puts Edmondson in an unbeatable position for back to back wins in the NSW championship. As he commented later “It’s fantastic to be able to wrap up the championship with one event in hand, especially with the great competition we’ve had this year. I’m really looking forward to the next event at King Edward Park and trying to end the season on a winning note.”