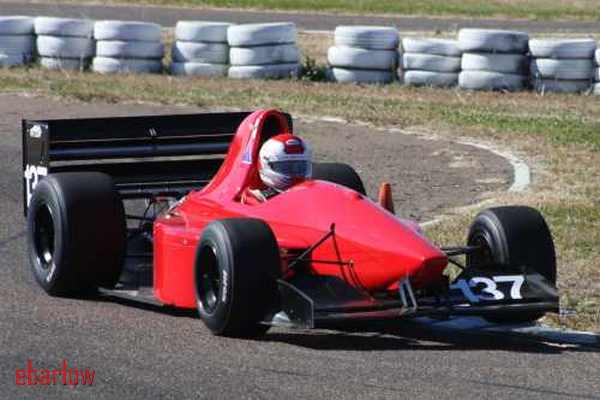 Tamworth Sporting Car Club put on perfect weather for Round 4 of the NSW Championship at the tight Oakburn Park course just west of town. From the outset close competition was the order of the day.Championship leader, Tim Edmondson chose to bring the Gould GR55B instead of the more nimble bike powered Force while his main protagonist, Doug Barry, (taking credit for the Mudgee-like weather) fielded the trusty Lola F3000.

Edmondson set the early pace, going under Peter Gumley’s course record on the second run with Doug Barry only fractions in arrears. Later runs caused some head scratching at Team Edmondson as Tim failed to improve and Doug closed in. The last (fifth) run saw Edmondson shave off a couple of tenths to claim FTD (30.13s) while Barry also kept his best for last, finishing just three tenths behind.

Both drivers were having a real go – between them a total of seven runs had gone under the old record. Tim Edmondson commented “If it wasn’t for Doug and his Lola keeping up the pressure we could have headed home hours ago”.At one point local driver (and club President) Matt Halpin featured as high as third outright in his Torana before the small bore openwheelers of Nick Mason and Peter Dight caught up with him.

Mason in his distinctive Vtwin Sparrow finally edged out Dight in the kart like Fubar ahead of Phil Pratt (Trojan). A philosophical Matt Halpin found himself bumped to sixth outright but at least he had the Top Tin Top award as a consolation and a new class record.The next group included the usual swam of Beetles featuring Heath Campbell with a new record followed by Greg Ward and Col Mayman. Mixed in were the Mitsubishi Evo of Scott Tutton and the quirky “BMW” dwarf car of Neil McLeod. Joanne Bell was again fastest lady.

New records also to Andrew Walker (Turnham), Greg Sticker (Arrow Clubman),and Eden Jones (RX7) and “Dashing Donn” Vidler (Mini).The win puts Tim Edmondson ahead in the Championship pointscore but Doug Barry is right on the money and desperate to carry the fight to the next round at Grafton.