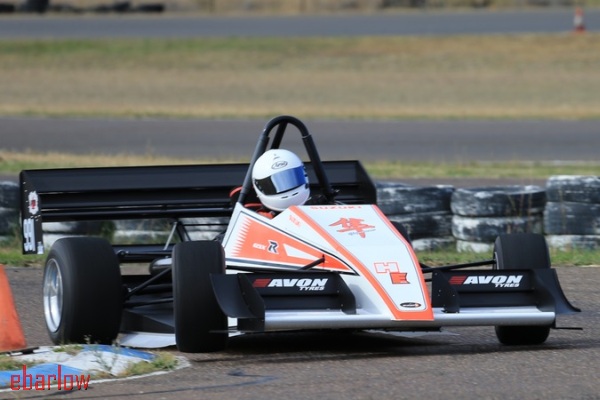 Perfect weather greeted the keen field of competitors who ventured to northern NSW for Round 4 of the NSW Championship at Tamworth’s Oakburn Park, May 18. Interest was again boosted by the arrival of past Aust. and Victorian champion Brett Hayward, backing up after his recent success at Canberra – clearly not only interested in getting the “most travelled award”.

After a couple of “sighters” the day before, Brett rolled out his self-built Hayward 014 and quickly got down to business with an opening run of 31.19s which compared favorably with Tim Edmondson’s outright record of 30.13s set last year. Next quickest on the time sheets was Malcolm Oastler (Dallara) 30.07s, Doug Barry (Lola T8750) suffering from the dreaded lurgi on 32.19s, and Ron Hay (Synergy Dallara) on 33.37s.

Warming to the tight layout, Hayward then rattled off a neat run of 29.68s, followed by a stunner of 29.52s – I’d hate to see how he would go with a bit more practice! Malcolm Oastler looked more than half a chance for most of the day, recording a string of 30s passes (the last one under the old record) but had to settle for second outright ahead of Doug Barry (30.64s) who squeezed (or was that sneezed in) in ahead of Ron Hay (31.56s).

Steve Woods was again the best in RR up to 2500cc while Dejan Buneta put in another strong performance in the evil black Supra ahead of a strong field in RR over 2500cc with David Spring (Commodore) and Geoff Brisby (HSV Clubsport) picking up the minor places. Long time competitor Peter Quayle took out RR AWD in the Impreza while Phil Edwards had the Mini performing well in the smaller Sports Sedan class.

The win moves Brett Hayward into the lead of the NSW Championship with 39 points, with Ron Hay and Doug Barry on 32 points and Malcolm Oastler on 31 points. Next round is at Grafton June 8 and the hot tip is that ‘Brett the Jet” intends to travel north again soon.