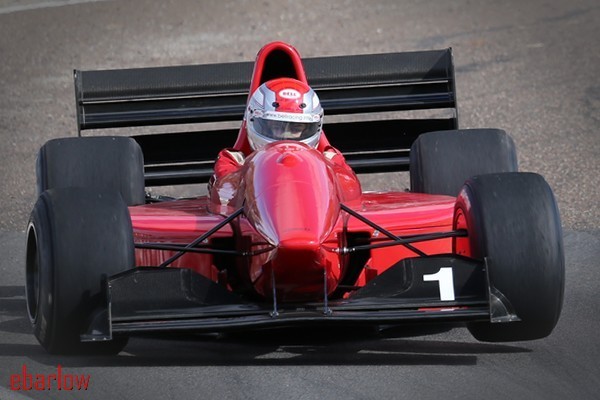 TIM ON TOP AT TAMWORTH!

Fine if a little chilly was the weather report but the competition was hot at Round 5 of the NSW Championship at Oakburn Park, Tamworth. National champ, Tim Edmondson (Gould GR55B) made a good start and was first into the 31 second bracket, ahead of dark horse Malcolm Oastler, having his first look at this course in his Suzuki powered Dallara F3490.

Next quickest was reigning State champ, Doug Barry who was battling hard to find a comfortable setup. The usually stable and dependable Lola T8750 looked a right handful as it fishtailed down the back straight under full power. He was followed by Ron Hay in the Synergy Dallara, another having dramas caused by a lack of traction control system.

As the day progressed Edmondson fired a couple of runs in the 30 second bracket, the best of which was good enough for FTD (30.42s), a touch outside his outright record of 30.13s, set last year. Oastler responded with a fine third run of 30.60s before an engine problem brought his charge to a halt. Doug Barry battled on for third outright (31.27s) just ahead of Ron Hay (31.45s), who was also eventually sidelined by electrical maladies.

Kempsey’s Darren Read (Minetti) quietly flew under the radar for fifth outright ahead of the “Evo Brigade” of Phil Heafey, Scott Tutton and Alastair Bell. Newcastle junior Cooper Calman continues to impress, putting the RX7 into ninth outright ahead of local driver Alan Barnes (Celica V8). Heath Campbell (and wife Christine) made a welcome return to hillclimbing in the VW Beetle. Heath’s antics in the VW guaranteed to keep the crowd amused.

Congratulations to TSCC for another well run event. No major incidents meant six runs all of which was appreciated by the competitors. With four rounds to go in the championship, Tim Edmondson leads the pointscore, ahead of Doug Barry with Malcolm Oastler now third outright.