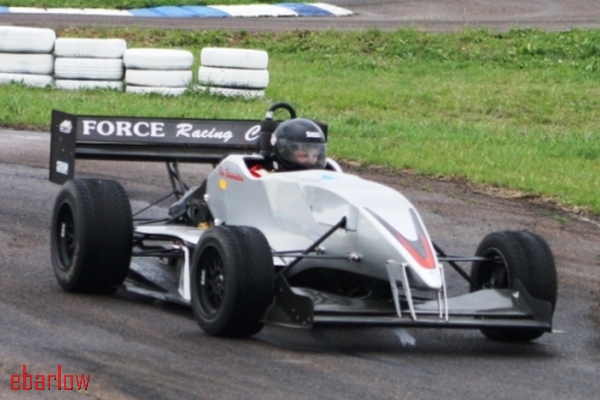 It was an enthusiastic group that made the trek north to Tamworth’s Oakburn Park on 14th September.  While not as epic a climb as the previous Mount Oxley course, the new venue could be summed up in two words: Lotsa Fun and well worth the trip.  Add in the likelihood of showers and things were bound to get interesting. Stuart Inwood (Nissan GTR) made the most of the early damp conditions with a first run of 41.03s, with Ron Hay (RH Honda) at 41.08s and championship leader Tim Edmondson (Force PC) 41.23s.

As the track dried the front of the field slipped to mid, then low thirty second territory, with Tim Edmondson quickest.  Ron Hay then got serious and after surviving what start line official Neil Farr had earlier described as “a real tank slapper” set a sensational fourth run FTD of 32.98s.  With a 0.44s margin up his sleeve a beaming Ron Hay then slipped the Honda onto the trailer commenting “when you’ve been at this awhile you know what a good run feels like …and that felt real good”.

With forecast showers approaching Tim Edmonson knew he only had one last shot at reclaiming FTD and put in a cool response of 32.67s – the Force is now rewarding the Edmonson team for their patience. Meanwhile Phil Pratt had coaxed the Trojan to a very creditable third outright ahead of Steve Moxon and co-driver Searle Courtright in the Axtell Suzuki open wheeler.  Michele Guyer was next, clearly enjoying the hit out in her gorgeous Formula Holden ahead of local ace Matt Halpin in the Torana (Best Tin Top).

There is no truth in the rumor that Matt does a few laps in the plumbing truck on the way home each evening!  Jon Bown (Altin 961) and Stu Inwood were two more to go under 36s. The Battle of the Beetles was resolved in the favour of Heath Campbell, from Grant Cook, then Nathan Abbott, from Ben Durie and Christine Campbell, with less than half a second separating the lot!