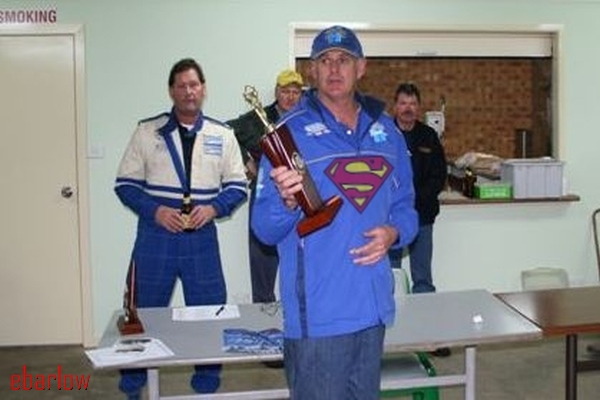 Round 6 of the NSW Championship, was held on July 11 at Tamworth Sporting Car Club’s fun venue at Oakburn Park and demonstrated how desperate this year’s struggle for the fifty year old trophy has become.

In the lead up, Tim Edmondson (08/09 Champion) suffered a heavy shunt at Kempsey and with the Gould GR55 not yet repaired, brought out his previous mount, the bike powered Force PC to regain some valuable points.

The previous round at Grafton saw eleven times NSW Champion Peter Gumley take the win and the pointscore lead but a split crankcase brought on a hasty rebuild to the venerable SCV’s supercharged Kombi engine.

Meanwhile Mudgee farmer, Doug Barry had knocked all the corners off the Lola a week before, forcing a string of all nighters to get to Grafton where not to be outdone, Neil Farr’s Bowin Hay suffered rear wing collapse.

Fast forward to Tamworth, where an early shower kept the drivers guessing on tyre choice and the abovementioned traded places.  Finally Gumley stamped his authority setting a new outright record and FTD of 31.01s, Neil Farr sneaked into second outright, Edmondson had to settle for third and Doug Barry was next quickest.