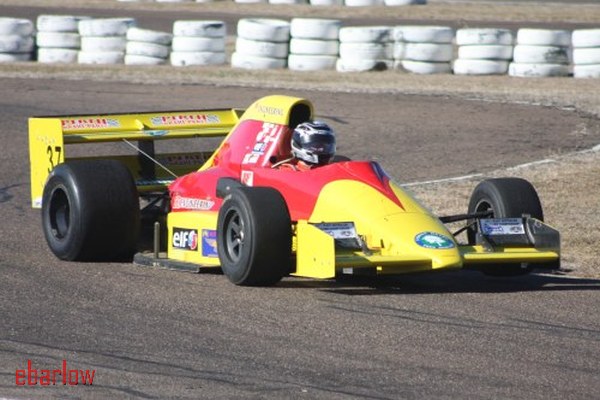 Our favourite Mudgee farmer and Championship leader Doug Barry is showing lots of determination and aims to take out this year’s NSW title.  He again put in an impressive display at Oakburn Park in Tamworth.  Not the biggest hill in sight but great fun according to the competitors.

The conditions were clear and sunny which was a relief to organisers who this year had a later timeslot because of the rain delayed Bathurst event.

Doug had the Lola T8750 cooking but Ron Hay is coming to grips with the Synergy Dallara and threatened an upset after the second run. Doug subsequently set FTD of 30.60s with Ron having to settle for next best on 31.22s.  Daryl Watt is another coming to grips with a new mount and impressed with a third outright in only his second outing in the ex-Edmondson Force PC.

Peter Robinson looked good in the PRS with Stuart Inwood next quickest in the GTR (Top Tin Top as well).  Matt Halpin was up to his usual wheel in the air antics (see pics) ahead of Phil Pratt (Trojan) and Scott Tutton in the EVO.

Beau Fernance looked smooth in the Lancer ahead of Darval Thomas (JWS) and  Smokin’ Steve Devjak (Commodore).  Aaron Osborne was having a ball in the Datto 1200 – staying ahead of Beetles his main priority followed by Fastest lady Karen Inwood in thirteenth outright.