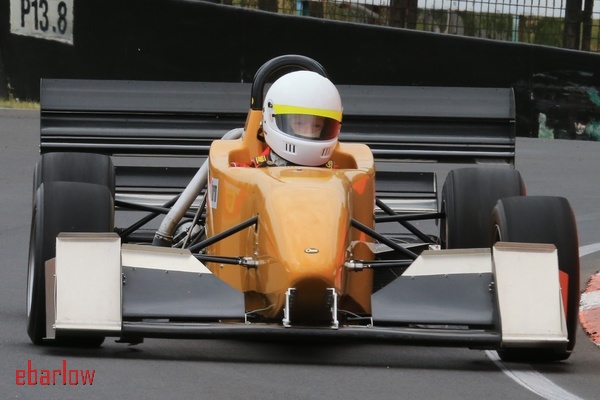 Close to ninety entrants rolled up to the line for Round 2 of the NSW Championship on the traditional Esses course, the first day of BLCC’s annual double header extravaganza.

The weather gods were smiling and all was good in NSW’s Central West. The early start to the season and other commitments had caught a few people out for Round 1 but it was felt that the Bathurst weekend would be a good indicator of form for the coming year.

Veteran hillclimber Ron Hay (Synergy Dallara) took up the chase in third ahead of a hard charging Phil Heafey (Mitsubishi Evo, 27.74s) and Round 1 winner Dave Morrow on 26.53s.

On only his second run Oastler stunned the crowd, setting what became FTD (22.36s) as Edmondson battled in the pits to correct a gearshift issue that was making the driving somewhat unpredictable.

Subsequent runs saw Oastler go no faster but Edmondson had a real go on run 3, closing the gap to 0.84s. Hay held on to third outright with a string of 25s runs while Heafey tried to produce an upset for the Tin Tops.

The wily Coffs Coaster, Dave Morrow (Krygger Suzuki) was next quickest with a string of 26s runs to keep ahead of Darren Read in the open wheel Minetti Monster. Meanwhile Canberra’s Zac LeLievre (Westfield Megabusa) continued his lightning performances, bringing up seventh outright with a best of 27.62s. Denis Russell took out F/L up to 750cc unopposed while long time racer Kevin Lewis (Dallara) was quickest in F/L 1301-2000cc ahead of Darval Thomas (JWS).

Paul Finch (aka The Silver Surfer) made a triumphant return to hillclimbing in the PRB and couldn’t help upstaging Matthew Windsor (Envoy) by dead heating on 28.63s.

Another long time competitor, Warwick Agustin (Mini) was best of the smaller capacity Sports Sedans with Steve Turner (MINI) best of the 2-3 litre ones. Phil Heafey was again quickest of the over 3litre S/S ahead of Matt Halpin (Torana) and Andrew Robertson Nissan 200SX.

Colin Mayman was best of the beetles ahead of Glenn Torrens, the well travelled Commodore of John Gilbert took out 3J ahead of Martin McLoughlin (Torana) and Adam Kane (Commodore).

With such a response its’s going to be an extremely competitive year right across the field. Some upsets are assured but the growing number of new competitors and a varied mix of cars heralds in a strong new era for NSW hillclimbing.